Thatcham straddles the River Kennet, the Kennet and Avon Canal, the A4 and the course of a Roman road. It is served by Thatcham railway station on the line between Reading and Newbury. Local employment is chiefly in light industrial premises, sales and distribution, retail and public sectors; see also West Berkshire, its district.

The area has evidence of occupation dating from prehistoric times and is listed in the Guinness Book of Records as the strongest claimant to being the oldest continuously inhabited place in Britain. The well-preserved remains of a Mesolithic settlements dating from 8400 to 7700 BC have been found in its vicinity. Evidence also exists of Bronze and Iron Age settlements and of a Roman town.

The name may have been derived from that of a Saxon chief called Tace (or perhaps Tac or Tec), who established a village in around AD 500. The settlement was known as Taceham - ham meaning village in Saxon. It is also possible that the name may have come from the Saxon þæc or thaec (thatch). Wherever it came from, the name Taceham persisted until after the Norman Conquest in 1066 before going through several minor changes until the current form was adopted in the 16th century. 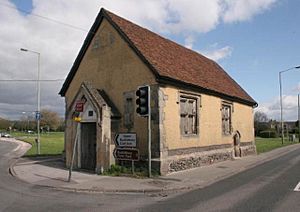 Chapel of St. Thomas the Martyr was erected around 1304

The town had a period of great prosperity around 1304 when the Chapel of St. Thomas the Martyr on the A4, now called the Old Bluecoat School, was constructed. At that time the population was larger than Newbury's but it declined as a result of the Black Death in 1348. There is a Norman parish church of St. Mary, which was largely reconstructed in 1857. This is believed to be built on the same site as an earlier Saxon church. It was also previously known as St. Luke's.

In 1121 King Henry I founded the great Abbey of Reading and endowed it with many gifts of land, including the Manor of Thatcham. At the same time Thatcham Hundred ceased to exist: the western part was transferred to Faircross Hundred, and the remainder to the Hundred of Reading.

In 1141 Thatcham Church, previously the property of the Diocese of Salisbury, was granted to Reading Abbey by the Empress Matilda, who at the same time confirmed her father's gift of the manor to the Abbey.

Thatcham has a site of Special Scientific Interest (SSSI) just to the south of the town, called Thatcham Reed Beds.

The name "Thatcham" is brand-associated with the approval ratings for car security systems issued by the Motor Insurance Repair Research Centre based near the town (see link below). For instance, "Thatcham Cat 1" (or just "Cat 1") is the approval for a combined car alarm and immobiliser, "Thatcham Cat 2" is for a standalone immobiliser and "Thatcham Cat 3" is for additional physical security devices such as steering wheel locks. 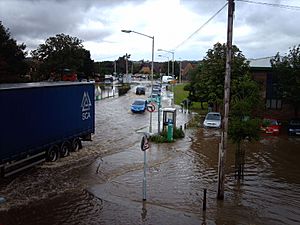 On July 20, 2007, parts of Thatcham were flooded during a period of sustained heavy rain, during which three times the average July monthly rainfall hit the town in just 24 hours. While the rivers did not overtop, the quantity of water flowing down the hills from Cold Ash and Bucklebury made many roads impassable and stranded hundreds of pupils at Kennet School who tried to wade with rope across Stoney Lane. About 1100 properties were affected; many residents moved out into mobile homes.

Thatcham is twinned with:

All content from Kiddle encyclopedia articles (including the article images and facts) can be freely used under Attribution-ShareAlike license, unless stated otherwise. Cite this article:
Thatcham Facts for Kids. Kiddle Encyclopedia.