Markenfield Hall is an early 14th-century moated manor house about 3 miles (5 km) south of Ripon, North Yorkshire, England. It is in the civil parish of Markenfield Hall, which in 2015 had an estimated population of 10. The estate was an extra parochial area in the Hundred of Burghshire. It was made a civil parish (spelt Markingfield Hall) in 1858. It was part of the West Riding of Yorkshire until 1974, when under the Local Government Act 1972 it became part of the new county of North Yorkshire. It is part of the Borough of Harrogate.

The house is an L-shaped castellated block, with a great hall that stands above an undercroft and was originally reached by an exterior stone staircase. It is lit by two double-light windows with quatrefoil transom under their arched heads. The house is defended by a moat, which is crossed by one bridge that is guarded by a 16th-century Tudor gatehouse. The house, including the gatehouse, is a Grade I listed building and a Scheduled Monument.

Several acres of land to the west and north of the house are emparked. The hall, adjoining land, and park pale are a Scheduled Ancient Monument listed as "Markenfield Hall moated medieval fortified house with associated service buildings and park pale".

Most years, the house is open for public tours in the afternoons for several weeks in May and June, and the property is also marketed as a wedding venue. Due to the COVID-19 pandemic in the United Kingdom however, the Hall and grounds remained temporarily closed as of June 2020 but the owners expected to be able to reopen in July, with tours not exceeding ten persons at a time on specific dates.

The Domesday Book of 1086 records two households at Markenfield.

In 1150 the estate was held by the Le Bret family who had a house there and adopted the name de Markenfield.

The present house was built for John de Markenfield, an associate of Piers Gaveston and a servant of Edward II. The Crown granted a licence to crenellate Markenfield in 1310, the same year that John was appointed Chancellor of the Exchequer. Sir Thomas Markefield was appointed High Sheriff of Yorkshire for 1484 and fought on the side of Richard III at the Battle of Bosworth. In 1569 Thomas de Markenfield was involved in the pro-Catholic Rising of the North and fled to the Continent. Markenfield was confiscated and granted to Thomas Egerton, Master of the Rolls.

Egerton never made Markenfield his main home. It devolved to a rented farmhouse but retained its features. In 1761 Fletcher Norton, 1st Baron Grantley bought the house, replaced the roof of the Great Hall and ensured that the house was structurally sound once more. Little is known about the chapel after 1569 but in the 1880s, it was used to store grain. More recently, the chapel was fully restored. The property descended to the 7th Baron Grantley, John Richard Brinsley, who began a restoration project in 1980 to convert the hall from a farmhouse into a family home.

The historic listing summary (not recently updated) provides this description of the Hall and its modifications: 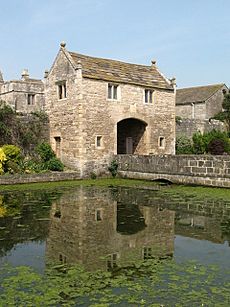 Part of the moat, with the 16th-century Tudor gatehouse

A news item about the property in May 2019 provided an update with photographs of the interior. The occupant at that time was Lady Deirdre, known as Lady Grantley for some years (nee Deirdre Elisabeth Mary Freda Hare) and more recently, as Lady Deirdre Curteis, widow of the 7th Lord Grantley, who had passed away in 1995. Lady Deirdre married her current husband, Ian Curteis, in 2001. The ceremony was held in the chapel which had been restored and refurnished by that time; this was the first wedding to be held there since 1487.

All content from Kiddle encyclopedia articles (including the article images and facts) can be freely used under Attribution-ShareAlike license, unless stated otherwise. Cite this article:
Markenfield Hall Facts for Kids. Kiddle Encyclopedia.