Cowley is a village contiguous with the town of Uxbridge in the London Borough of Hillingdon. A largely suburban village with 16 listed buildings, Cowley is 15.4 miles (24.8 km) west of Charing Cross, bordered to the west by Uxbridge Moor in the Green Belt and the River Colne, forming the border with Buckinghamshire. Cowley lies on a ridge 28 to 45 m (92 to 148 ft) above mean sea level.

St. Laurence Church was in recorded as in the parish of Cowley in the 1086 Domesday Book along with the parish land owned by Westminster Abbey, valued as worth to its lord two pounds per year in 1066 and at one pound ten shillings in 1086. Its independent male householders were two villagers, one cottage-owner with one cultivated ploughland for one lord's plough team. Lord's lands (also referred to as a manorial park) took up 1.5 ploughs of land, and meadow land half a plough. The woodland was worth forty pigs (per year) and a mill was worth for five shillings per year.

A lay franchise (jurisdiction) of the church was held in 1293 by Lucy Peachey, whose name is reflected in several of the roads and by the local government ward of Cowley Peachey.

Cowley was surrounded by Hillingdon parish, of which the town of Uxbridge itself and Uxbridge Moor, which separated Cowley from Buckinghamshire on the west, formed part. Part of the Moor is now the M25 motorway. Within the triangle formed where the River Pinn and Fray's River meet, Cowley parish was so intermixed with Hillingdon that parts of it were entirely detached from the rest, while other parts, some detached, lay farther east across the Pinn. For this reason most of the general history of the parish has to be dissected from that of Hillingdon. These complex parish borders were those of just one manor carved out before the Norman conquest from Hillingdon. While Hillingdon parish administered to many areas now in Cowley, most of these were in one manor within Hillingdon whose name is preserved by few places in maps, Colham.

In the west, along the main road between Uxbridge and West Drayton, and mostly to the north of the Iver Lane turning, lay the village formerly known as Cowley Street, mostly in Cowley parish. This hamlet and the church hamlet formed the main areas of settlement within the parish, though there were a few houses elsewhere, including some at what is now called Cowley Peachey, the southern part of Cowley. This name, however, is of recent origin as applied to the hamlet as its older name of 'Three Households' or 'Three Houses' indicates – Cowley Peachey was not a settlement in itself: part in any case lay outside the parish bounds. 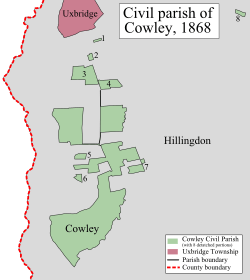 Before 1882, when the first important changes were made in its boundaries, the parish of Cowley spanned 300 acres (120 ha) irregularly shaped but mostly south of Uxbridge, between a branch of the Colne called Fray's River on the west and the River Pinn, which runs into Fray's River on the east. A small piece (2 acres (0.81 ha)) of glebe land belonged to Cowley church on the other side of Hillingdon by Long Lane.

In 1796 Cowley Field was inclosed, with the statutory object of consolidating the parishes of Hillingdon and Cowley. As a result, Cowley received several blocks of land, of which the largest were connected to the part of the parish by the church and to the part at Cowley Street by roads which the Commissioners decreed were to be repaired by Cowley parish and which therefore became part of it. Four parts of the field north of the Greenway were also assigned to Cowley but remained detached (nos. 1-4 on the map), and so did two others farther south by the High Street and by Maygoods Lane (nos. 5-6). Nomansland (no. 7), across the Pinn, also remained cut off from the rest of the parish, while the little field of glebe nearly 2 miles away in Long Lane (no. 8) was unaffected by the award.

In 1547 the parish contained 36 'houseling' people, in 1719 there were 109 inhabitants, and in 1801 the population was 214. Because of the division of the village, the manor and parish never constituted a real community, the manorial court made Regulations about the fencing of the open fields, meadows, and commons, and the stinting of the animals pastured there.

During the later 19th century increasing amounts of land were given over to market- and nursery-gardens, and to brickworks. About 1800 the stretch of the Grand Junction Canal through Cowley was opened, and packet boats ran for a while in 1801 and occasionally in the next few years between Uxbridge and London. The Packet Boat Inn at Cowley Peachey, licensed in 1804, commemorates the period, and the small group of buildings had appeared around two docks there by 1825.

The Uxbridge branch of the Great Western Railway was opened in 1856 and ran through Cowley, but there was no station here until 1904, and despite the spread of building from Uxbridge in the north, the beginnings of industry at Cowley Peachey, and the three large mills just outside the western boundary of the parish, Cowley remained an almost entirely rural village until after World War I In 1891, just before the parish was enlarged, the population was 322. In 1901, after the enlargement, it was 869, and this had only risen to 1,170 by 1931. During the 1930s there was a good deal of building, partly by Uxbridge council, and the population of the same area was 3,687 in 1951. Until 1965 a great many more houses were built, bringing the total provided by the council to nearly 1,000 in 1959, so that much of the area east of the main road and south of Station Road has been covered, though allotments remain between Hillingdon and Cowley. The diversion of Peachey Lane in 1938 and the blocking of Maygoods Lane about 1953 have destroyed the old road plan of this part of the parish. 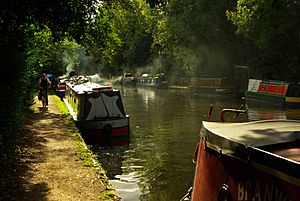 Cowley Lock, one of the two conservation areas

Cowley lies on a southwest-sloping ridge 28 to 45 m (92 to 148 ft) above mean sea level and is a village contiguous with Uxbridge to the north, in the west of the London Borough of Hillingdon — a largely suburban development, it is 15.4 miles (24.8 km) west of Charing Cross, bordered to the west by the Metropolitan Green Belt, the River Colne and Buckinghamshire. Between the boundaries marked by the Pinn and Colne the soil is traditionally called (fertile) brick-earth which has medium permeability whereas east of the Pinn covering most of London is London clay and gravel, a mixture of good and poor drainage. On more descriptive modern analysis the soil is "slowly permeable seasonally wet acid loamy and clayey soil", with non-permeable loamy soil marking the lowest part. 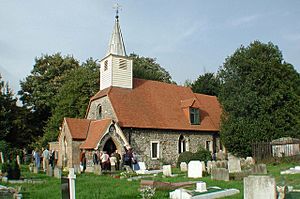 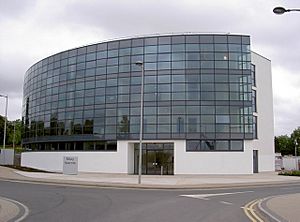 A number of older buildings survive, forming in Cowley all but one of the 15 architecturally listed buildings, the other being the main lecture building of Brunel University.

Cowley House, and the Manor Farm are the most architecturally and historically significant. In the High Street, Old Vine Cottage, The Crown, and Maygood's Farm date from before 1700, and there are several detached 18th-century houses there, some of which may incorporate earlier work. At Cowley Peachey are two timber-framed houses: the Old Cottage probably dates from the 15th or early 16th century and is a three-bay house of which the central bay was originally an open hall. At some later date the hall was divided into two storeys and a brick chimney was inserted. The Shovel in Iver Lane is also Grade II listed.

St Laurence Church is listed higher than all of the other buildings in Cowley architecturally, at Grade II*, this building was in existence by the 12th century, stands near the Pinn on the eastern side of the manor: there is no evidence of a proper settlement of any size here, though there were probably always one or two buildings beside the Church.

The main "Uxbridge campus" of the university is in the north east of Cowley which is in the Uxbridge post town and therefore postally referred to as Cowley, Uxbridge.

The Adhya Shakti Mataji Temple is a Hindu Temple in Cowley High Street. It was the subject of a suspected arson attack in June 2013.

Uxbridge branch railway line was a two-track railway operating from 1836 to 10 September 1962 between West Drayton in Yiewsley on the Great Western Main Line and Uxbridge, with an intermediate station at Cowley. Station Road in Cowley has bridges where the tracks once were.

All content from Kiddle encyclopedia articles (including the article images and facts) can be freely used under Attribution-ShareAlike license, unless stated otherwise. Cite this article:
Cowley, London Facts for Kids. Kiddle Encyclopedia.