Newland with Woodhouse Moor is a civil parish in the City of Wakefield in West Yorkshire, England, consisting of some open countryside west of Normanton, including Newland Hall.

Early in its history, the preceptory was the beneficiary of the largesse of a powerful patron, Roger Le Peytevin, lord of the manor of nearby Altofts. Later, the longtime lords of the manor were the Levett family, who also had ties to nearby Normanton as well as to the chivalric order. On 2 October 1447, William Lyvett (Levett) was admitted tenant to the Knights Hospitaller at Newland and preceptor of the Hospitallers' community there.

At the time of the Dissolution of the Monasteries, King Henry VIII dissolved the Newland preceptory and confiscated the property. It was subsequently sold to a member of the Bunny family of Newton. Later, the Silvester family purchased the estate, and in 1740 built Newland Hall as its principal residence. The 54-room Hall was demolished in 1917. The farm buildings belonging to the former Newland Hall are Grade II listed buildings, as is the old stable block associated with the property, and which once carried the cross of the Knights Hospitaller.

The 2001 census recorded a population of zero for the parish, which was once an extra-parochial area. 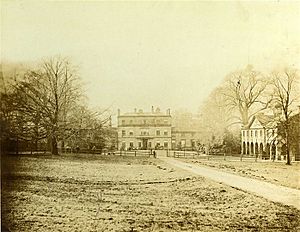 All content from Kiddle encyclopedia articles (including the article images and facts) can be freely used under Attribution-ShareAlike license, unless stated otherwise. Cite this article:
Newland with Woodhouse Moor Facts for Kids. Kiddle Encyclopedia.