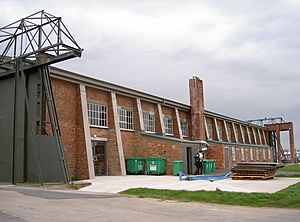 Side view of the renovated "Belfast" hangar (October 2017)

Aerospace Bristol is an aerospace museum at Filton, to the north of Bristol, England. The project is run by the Bristol Aero Collection Trust and houses a varied collection of exhibits, including Concorde Alpha Foxtrot, the final Concorde to be built and the last to fly.

The museum is situated on Filton Airfield and the main exhibition is housed in a First World War Grade II listed hangar, with Concorde situated in a new, purpose-built hangar. The exhibition covers over 100 years of aviation history through two world wars, exploring the role of aircraft in these conflicts, through the drama and technological advances of the space race and on to the modern day.

The collection contains over 8,000 artefacts. There are several Bristol-built aircraft including Concorde Alpha Foxtrot, a Bristol Scout, a Bristol Fighter and a Blenheim IV (World War II Bristol Bolingbroke bomber, under restoration), as well as many scaled models. The exhibition is themed around seven different eras of aviation with a separate hangar that celebrates the story of Concorde and its local connection.

All content from Kiddle encyclopedia articles (including the article images and facts) can be freely used under Attribution-ShareAlike license, unless stated otherwise. Cite this article:
Aerospace Bristol Facts for Kids. Kiddle Encyclopedia.