Charlton was the name of a small village or large hamlet in Gloucestershire, England with a Bethel Chapel and Sunday School. It was demolished in the late 1940s. Its site is (in 2020) occupied by part of the derelict runway and safety margins of the former Bristol Filton Airport. The village was located between Filton and what is today the Cribbs Causeway out-of-town commercial and retail area immediately north of Bristol. To the north of the village lay fields and Over Court Deer Park. which is today Bristol Golf Club. 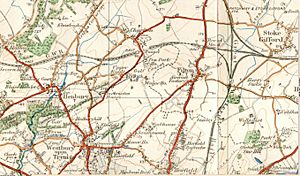 The area round Filton near Bristol in England as about 1935

Charlton was a tything in the ancient parish, and later civil parish, of Henbury. In 1870 it had a population of 425. Between 1910 and 1915 the village was served by Charlton Halt, on the Henbury Loop railway line just south of the village. In 1935 the village was transferred to the civil parish of Almondsbury.

The B4057 road ran through the village. Charlton had several farm houses, a public house called the Carpenters Arms, a post office, several large houses and a few cottages.

In the late 1940s nearly all of the village was demolished to make way for an extension of the main runway at Filton Airfield, now Filton Aerodrome, to accommodate take-offs of the giant Bristol Brabazon propeller-driven airliner. Just before demolition, many of the former residents were rehoused in council housing on Patchway Estate.

Although the Brabazon project was cancelled in 1953, the extended runway proved very useful later, when Vulcan V bombers were dispersed to Filton during the Cuban Missile Crisis and when Concorde supersonic airliners took off.

Nowadays, the runway over the site is frequently used by various large Airbus jetliners, such as the A300 and A330.

The name survives in Charlton Common – a public recreation area, to the south of the original settlement – Charlton Road, which led from Passage Road, Westbury on Trym, to the village, and Charlton Lane, which led from Henbury and Brentry.

Filton Airfield is to close from the end of 2012. The decision results from a review of its financial/commercial profitability. The future for the site, at this time, is unclear.

All content from Kiddle encyclopedia articles (including the article images and facts) can be freely used under Attribution-ShareAlike license, unless stated otherwise. Cite this article:
Charlton, Bristol Facts for Kids. Kiddle Encyclopedia.