Southmead is a northern suburb and council ward of Bristol, in the southwest of England. The town of Filton (in South Gloucestershire), and the Bristol suburbs of Monks Park, Horfield, Henleaze and Westbury on Trym lie on its boundaries.

The River Trym rises in Southmead and flows southwest through Badock's Wood, a Local Nature Reserve. There is a round barrow near the northern end of the wood.

Southmead was a manor of the parish of Westbury on Trym. The manor house, mentioned in a document of 1319, was near the south end of what is now Southmead Road. Most of the estate of 313 acres (1.27 km2) was sold in the late 19th century. By 1888 Southmead was a small hamlet on Southmead Road. Southmead Hospital, formerly the Barton Regis Workhouse, was opened there in 1924.

Large-scale development of the area started in 1931, when the Bristol Corporation built 1,500 houses to the north of Southmead Road, partly to house families cleared from the slums of central Bristol, and partly to address the housing shortage at the time. A further 1,100 houses were built after World War II. Since then, reference has often been made to the "pre-war estate" of Southmead and the "post-war estate".

The centre of Southmead is along Greystoke Avenue, a wide road with grassy areas some distance to the North of the original hamlet on Southmead Road. The area to the South and West, falls within Westbury-on-Trym and Henleaze ward since the last boundary review and further to the May 2016 elections. Parts of Southmead to the South East of Southmead Road, including the hospital, are in Horfield ward. 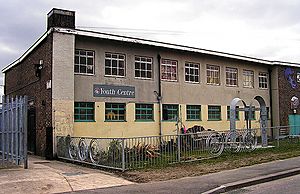 Efforts have been made to improve the area's social problems and implement environmental improvements, many of which have been successful. Social policies have led to a more mixed housing offer and to some extent gentrification, with improved infrastructure and local services. The right to buy has led to an increased transfer of housing provision from tenanted to owner-occupation. Major employment hubs at Filton, MOD Abbey Wood and the increase of services at Southmead Hospital have brought increased affluence and opportunity to the area. A greater selection of shops and facilities have come to the area, allowing those on limited incomes to access food more cheaply and readily. Whilst Southmead as an area looks and feels as though it is improving, it still experiences deprivation. The Central part of Southmead still sits within the most 10% deprived areas of England, and the South West of the Ward since 2015 now falls within the bottom 10-20% most deprived areas. Ongoing social policies and economic impacts are taking time to incrementally improve the area.

Residents have good geographical access. There has however been a transfer of public services away from physical resources to more central, virtual and internet based services. For example the Southmead Police Station is due to close, with a more regional hub at Patchway. Council tenant services are to be reduced at Southmead House off Greystoke Avenue. Bus services, whilst sometimes locally critiqued, are accessible and more frequent as compared to some other areas of the City. A frequent service connects residents to the Gloucester Road area, City Centre and Cribbs Causeway for shopping. The nearest station is however 2–3 miles away at Filton Abbey Wood.

There is good provision of health services with a doctor's surgery on Ullswater Road and a modern new facility at the Greenway Centre. A regional hospital, and A&E facility can be found at Southmead Hospital. The Lannercost provides facilities for those with physical and learning impairments. There are a selection of care homes and sheltered accommodation about the ward area. Despite access to health facilities Southmead still has poor health outcomes; with life expectancy at 77 years, some 5 yrs lower than neighbouring Henleaze but not quite as bad as some areas such as the Bedminster at 76.4 years.

The area is well served with a range of local parks and sporting facilities. There is a private member's sports club at David Lloyd near Badock's Wood. There are sports pitches at Greenway Centre to the South East, and at Charlton Mead to the East of the area. Filton Golf Course abutts Southmead to the North East. There is an excellent MUGA and Adventure Playground off Doncaster Road. There are also play areas off of Glencoyne Square, Charlton Mead and off Greystoke Avenue. To the South of Southmead, only a mile away, is Horfield Sports Centre with public access to 3G pitches, gym, sports Hall and an excellent swimming pool.

There is ready access to children's provision through a selection of primary schools at Baddocks Wood, Little Mead and Fonthill. Baddocks Wood Children Centre complements Early Year's provision to the South of the area. Young people are however said to be more socially deprived and not as likely to go to university as others in the country which is reflective of the national socio-economic imbalances within the UK's education system.

Southmead has historically had adverse press due to community safety and cohesion. Following the 1980 St. Pauls riot, Southmead experienced two nights of rioting.

On 19 October 2009, a BBC Panorama report, investigating the extent of racism in modern Britain, featured two undercover journalists who posed as Muslims on the Southmead estate. The journalists were subject to 50 incidents of racist abuse from local residents in two months. The couple were verbally and physically attacked during their time in the area of Southmead where they were residing, being told to go back to Iraq. The word "Jew" was also used as an insult against the man and a brick was thrown. The day after the programme was broadcast, a 22-year-old man and an 11-year-old boy were arrested on suspicion of racially aggravated assault.

Despite the somewhat negative perceptions of Southmead by some, the area is said by locals to be "a great place [with] ... a strong sense of community spirit, lots of community activity and lots of optimism for the future. The local neighbourhood plan says "our vision is that Southmead is known as a great place for everyone to live, a strong community where residents work together, inspire each other and people of all ages have the skills and confidence to achieve their full potential" This plan was the outcome of significant community consultation and planning. Two of the nine strands of the community plan target community safety and strengthening the community (including inclusion and cohesion). The Southmead Development Trust (SDT) co-ordinates and oversees the plan.

All content from Kiddle encyclopedia articles (including the article images and facts) can be freely used under Attribution-ShareAlike license, unless stated otherwise. Cite this article:
Southmead Facts for Kids. Kiddle Encyclopedia.