Patchway is a town in South Gloucestershire, England, situated 10 km (6.2 mi) north-north west of central Bristol. The town is a housing overflow for Bristol being contiguous to Bristol's urban area, and is often regarded as a large outer suburb. Nearby are the other Bristol satellite towns of Filton and Bradley Stoke. Patchway is twinned with Clermont l'Herault, France, and Gauting, Germany. It was established as a civil parish in 1953, becoming separate from the parish of nearby Almondsbury.

Housing in Patchway Estate lies southwest of the main London-South Wales railway line. Coniston Road circles the estate, where many of the streets are named after birds and trees. Patchway Trading Estate is adjacent to the dual carriageway linking the A38 and M5. The mall and two retail parks at Cribbs Causeway, just north of Filton airfield, form the largest shopping centre in South West England.

On the opposite side of the railway track is the Stoke Lodge housing estate. The A38 trunk road, upgraded to a dual carriageway in the mid-1970s, separates the two housing estates.

Aztec West, an office and warehouse park, is situated on the northern fringes of the town, sandwiched between Patchway Estate and Stoke Lodge. The CEGB Pension Fund started the park in the early 1980s and it is now owned by Arlington. New phases of this development are being built.

A major four-level motorway interchange (M4/M5) is close to Aztec West. Called the Almondsbury Interchange, it was completed in the early 1970s.

Patchway Greenway is a semi-rural footpath which leads from Patchway Common eastwards to Bradley Stoke. On the north-west fringe of Patchway Estate, a footbridge (known locally as the Banana Bridge) passes over the M5 motorway,and leads to a footpath that passes down over the steep Severn Escarpment into the village of Over.

Patchway railway station is on the mainline South Wales-London railway line, but the service to Bristol is infrequent, only once per hour.

At the start of the 20th century, Patchway was a small village centred on Patchway Green, now known as Patchway Common. Part of the village straddled Gloucester Road, south of the bridge which passed over the Great Western Railway line from Bristol to South Wales. Patchway Tunnel was nearby.

Industrialization started when a flying school at Filton Aerodrome was converted into an aeroengine factory, when the Bristol Aeroplane Company (BAC) acquired Cosmos Engineering in 1920.

During the 1930s, new housing was built on Patchway Estate, just north of Filton Aerodrome, and bungalows were built on Stoke Lane.

BAC started the development of East Works on Gypsy Patch Lane during the re-armament programme of the 1930s. Engine component testing facilities were built alongside the main railway line during the 1930s, 1940s and 1950s.

A dual carriageway, known as the Filton Bypass, was constructed through Patchway Estate in the late 1930s, to divert A38 road traffic away from Filton. During World War 2, the US Army had a tented encampment along the wide verges of the bypass. In the late 1940s the bypass was severed by the extension of the main runway at Filton aerodrome to accommodate the Bristol Brabazon airliner. This project also required the demolition of the nearby hamlet of Charlton, many of whose residents were rehoused on Patchway Estate.

Also in the mid-1960s, the New Filton Bypass (now part of the M5 motorway) was constructed, on the north-west fringe of Patchway Estate, along the upper edge of the Severn Escarpment. This road forms the boundary between the town of Patchway and the adjacent Green Belt.

Rolls-Royce have built new production facilities on the Gypsy Patch test site, close to the A38 and have completely demolished the old East Works, for redevelopment. All the Rolls-Royce Bristol facilities are now north of Gypsy Patch Lane, the former West Works site on the airfield having been redeveloped by the Post Office in the late 1980s. 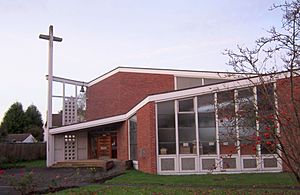 Patchway is one of the 44 Parish and Town Councils in South Gloucestershire. Amenities include a fire station, library, doctor's clinic and schools. There is a Day Centre for the elderly and a children's play area. Sports facilities include cricket and football pitches and a sports hall.

Early in 2009, the post office located at Patchway roundabout closed. A plan to reopen a Post Office at the Parade shops on Coniston Road was developed but this was cancelled in September 2009, with the local council stating that plans were in hand to reopen at an undisclosed site. In June 2010 it was disclosed that the Spar convenience store on Rodway Road was developing the rear of the store (currently used for goods storage) to accommodate a Post Office facility. The Post Office facility finally opened on Friday, 6 May 2011, following building work and installation of security features at the rear of the store.

The Britannia public house was demolished in March 2010. It was put on the market with a view to attracting buyers for £275,000 but, no buyers were found.

During mid-2010 the current library premises were vacated with a small library being set up in the nearby Casson Centre. The library premises were demolished and this site was incorporated with that of the former Britannia PH to facilitate the building of a new three storey construction on behalf of the local NHS Trust – The Hub. The building will include various social health and well-being amenities for use by all ages. The Hub will also include a new library. The majority of the structure for the first two storeys had taken shape by Christmas 2010. By Autumn 2011 the structure of the building was complete and the building was being fitted out. External groundwork and paving was mostly complete by now as well. The Hub was opened on Monday 5 September 2011 and has since become a focal point of the locality. Due to its height, rising to three storeys, and position on the gently rising slope of Rodway Road, the Hub building can be seen rising above the surrounding buildings, particularly when approaching the area from the north side, over the railway bridge.

Patchway has had a long connection with the Scout Movement, with the Headquarters being located in buildings of Worthing Road – behind the Town Council offices. In June 2011 the Scout Movement are celebrating their 70th Anniversary and will be holding special events to commemorate this.

At the end of August 2011, work began to revise the road layout on Highwood Lane, which will see all through traffic eliminated, the road being closed to normal traffic between Coniston Road and Durban Road, apart from access to the local centre at the Durban Road end. The south side of the then current dual-carriageway becoming part of the internal roadway network for the Charlton Hayes development and the north side being restricted to buses only.

On April 1, 2015 the Stoke Lodge part of Patchway, which is located to the north of the railway line, on the eastern side of the A38, became part of the new parish of Stoke Lodge and The Common.

Charlton Hayes is a new extension to Patchway to the south, named after the demolished village of Charlton. Construction started in late 2009 and includes a new bypass road from the A38 to the bottom of the Cribbs Causeway Mall. Approximately 6000 new homes will be in the final development.

The new link road – Hayes Way − opened just before Christmas 2010, just in time to assist in relieving Highwood Lane of some of the serious road traffic pressure which have previously been experienced on Highwood Lane. The road provides a direct link from The Mall (Cribbs Causeway) to the main A38 heading north out of Bristol towards the M5/M4 junction at Almondsbury and also grants users a chance to glimpse the Concorde 216 currently stored at the airfield.

All content from Kiddle encyclopedia articles (including the article images and facts) can be freely used under Attribution-ShareAlike license, unless stated otherwise. Cite this article:
Patchway Facts for Kids. Kiddle Encyclopedia.