Wickwar (not to be confused with Warwick) is a village and civil parish in South Gloucestershire, England, located between Chipping Sodbury and Charfield. At the 2001 census, the parish had a population of 1,943. The Wickwar brewery is a popular local producer of cask ale.

The village is on the main Bristol–Birmingham railway line, and once had a station, but this closed in January 1965. To the south, the line passes through a tunnel 1,401 yards (1,281 m) long. Wickwar also lies near to the source of the Little Avon River, which rises in woodland to the east.

The place-name 'Wickwar' is first attested in the Domesday Book of 1086, where it appears as 'Wichen', meaning 'dairy farm or settlement'. The manor was given to John la Warre by King John and was held by Roger la Warre in 1285, when it was referred to as 'Warre Wyke'. Warre is a Norman family name which gave its name to Wickwar. The village originally lay on the Old Saltway from Droitwich to Chipping Sodbury and Pucklechurch, and was developed in the late 13th century by the de la Warre family with the establishment of a market in 1285. The main street, the present High Street, was laid out around the market place with uniform burgage plots and rear access lanes. Burghers paid an annual fixed rent to the overlord, but they could sell their tenancies much as in the free market today. In addition they often carried on trades and crafts which, together with their property rights, distinguished them from the feudal peasant. Livestock were often kept on the burgage plots behind the house, and this necessitated the rear access lane.

The original settlement of Wickwar was located around the church and Poole Court, a 16th-century Manor House demolished in the 19th century, to the north of the village. All that remains of the Manor is its terraced garden, south-west of the church, which formerly stood on the edge of a lake. The Parish Church of the Holy Trinity is set on a small hill and is of 12th-century origin. It was extensively remodelled in the 14th and 15th centuries and was restored c.1881 by W L Bernard. Inside there is an interesting sculpture of St John the Baptist dated 1496, which was originally housed at Poole Court.

To the north of the church, within the churchyard is the Sunday School, built in 1837 in a Gothic revival style. The churchyard also has a number of chest tombs, which represent a good collection of local and classical tomb forms and contribute greatly to the setting of the church.

The Old Rectory to the west of the church dates from 1864 and was built by George Devey for the Earl of Ducie. It is an impressive house with an interesting doorway surmounted by the Earl of Ducie's coronet.

Another interesting building is the Old Grammar School, founded in 1684 by Alexander Hosea for poor children of the village.

The High Street has a fine collection of mostly 18th-century fronted, rendered or stuccoed houses, including Albert House and the Police station. The Town Hall c.1795 is also an impressive building, with arched openings and a bellcote with pinnacle. The Town Hall clock mechanism is also important, thought to date from 1660. 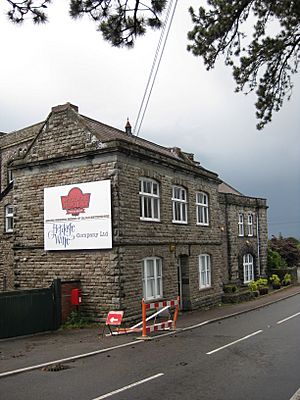 Wickwar Brewery, to the north of the town

Wickwar displays the characteristics of a market town with a wide High Street and burgage plots. Visually, each end of the High Street is terminated by a bend in the road. The road width of the High Street varies considerably, from ten yards at its widest point at the centre of the High Street, to four yards at the northern end. This provides visual interest and variety, adding greater importance to the flanking buildings.

Entering Wickwar from the north, via West End Road or the B4509, the walls that line the road are of local stone and form a strong feature contributing to the village character. Furthermore, the views of the Old Rectory and the church behind high on the hill, provide a focal point to the town.

The area around the church and the Old Rectory is an attractive landscape with clumps of trees adding to the scene. The pathway to the Church is a distinctive local feature lined by mature trees as it rises steeply up the hill. The terraced gardens of the former Poole Court also add interest, with the tower to the south – the air shaft of the railway tunnel – beneath the site of the drained lake.

This area of the town is particularly attractive, with the undulating landscape and openness contrasting with the inward facing town centre. The views from the churchyard are also splendid, with the Nibley Monument to William Tyndale clearly visible on the horizon and the Somerset Monument to Lord Edward Somerset to the right, both notable landmarks.

The buildings on High Street are largely two-storey with varying roof lines, heights and facades. These features, coupled with the assortment of clay-tiled and Cotswold stone slate roofs, and rendered, stucco or stone houses add interest to the general street scene. This is further enforced by the use of colour on the buildings, varying from pink to yellow.

On the morning of 9 January 1987, a gas pipe running underneath the High Street exploded, demolishing a house and damaging others nearby. Fortunately an off-duty policeman returning from a late-night game of backgammon smelt the gas, and raised the alarm, evacuating the street to the local Social Club before the explosion. His house was destroyed, and others significantly damaged, but no-one was harmed. As he said at the time, had he been in bed at the usual time, it would have been far worse.

As a result of the explosion a ban on heavy vehicles was introduced throughout the village, as it was thought that frequent use of the road by lorries, coupled with freezing weather conditions, had caused the 1950s pipes to break.

Spherules are found lying unconformably over Carboniferous limestone in Wickwar Quarry. These are possibly tektite deposits, formed as molten material ejected by a meteorite impact fell back to Earth.

All content from Kiddle encyclopedia articles (including the article images and facts) can be freely used under Attribution-ShareAlike license, unless stated otherwise. Cite this article:
Wickwar Facts for Kids. Kiddle Encyclopedia.