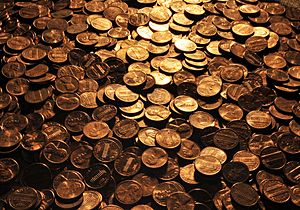 Pennies from the USA.

A worn medieval penny, probably dating from the reigns of Henry VI-VII, AD1413-1461

In British and American culture, finding a penny is often thought to be lucky. A popular expression is "Find a penny, pick it up, and all the day you'll have good luck." If someone asks you "A penny for your thoughts" They're wanting to know what you think. The phrase was first written in John Heywood's 1547 Dialogue Conteinying the Nomber in Effect of All the Proverbes in the Englishe Tongue, written when the penny was still a sterling silver coin.

The possibly related American expression "my two cents" (meaning "my humble opinion") uses the low value of the penny to make fun of one's own thoughts in a funny way.

In British English, to "spend a penny" means to urinate. The phrase does actually imply spending an actual penny: coin-operated public toilets commonly charged a predecimal penny, starting with the Great Exhibition of 1851. Around Decimal Day, British Rail introduced the "Superloo", better public toilets that charged 2p (roughly the equivalent of 6d.).

All content from Kiddle encyclopedia articles (including the article images and facts) can be freely used under Attribution-ShareAlike license, unless stated otherwise. Cite this article:
Penny Facts for Kids. Kiddle Encyclopedia.