Karl Friedrich Benz (November 25, 1844 – April 4, 1929) was a German engine designer and car engineer, generally regarded as the inventor of the petrol-powered automobile, and together with Bertha Benz pioneering founder of the automobile manufacturer Mercedes-Benz. 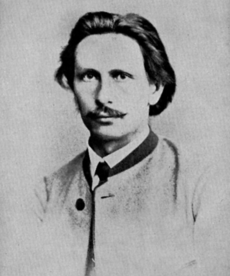 Karl Benz was born Karl Friedrich Michael Vaillant in Mühlburg, which is part of modern Germany, to Josephine Vaillant and a locomotive driver, Johann Georg Benz. Despite living in near poverty, his mother strove to give him a good education. Benz attended the local Grammar School in Karlsruhe and was a prodigious student. In 1853, at the age of nine he started at the scientifically oriented Lyceum. Next he studied at the Poly-Technical University under the instruction of Ferdinand Redtenbacher. 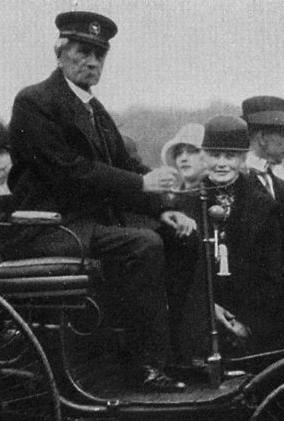 Benz had originally focused his studies on locksmithing, but he eventually followed his father's steps toward locomotive engineering. On 30 September 1860, at age 15, he passed the entrance exam for mechanical engineering at the University of Karlsruhe. Benz graduated 9 July 1864 aged 19.

During these years, while riding his bicycle, he started to envision concepts for a vehicle that would eventually become the horseless carriage.

Following his formal education, Benz had seven years of professional training in several companies, but did not fit well in any of them. The training started in Karlsruhe with two years of varied jobs in a mechanical engineering company.

He then moved to Mannheim to work as a draftsman and designer in a scales factory. In 1868 he went to Pforzheim to work for a bridge building company Gebrüder Benckiser Eisenwerke und Maschinenfabrik. Finally, he went to Vienna for a short period to work at an iron construction company. 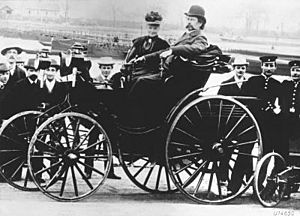 Bertha Benz with her husband Karl Benz in a Benz Viktoria, model 1894

In 1871, at the age of twenty-seven, Karl Benz joined August Ritter in launching the Iron Foundry and Mechanical Workshop in Mannheim, later renamed Factory for Machines for Sheet-metal Working.

The enterprise's first year went very badly. Ritter turned out to be unreliable, and the business's tools were impounded. The difficulty was overcome when Benz's fiancée, Bertha Ringer, bought out Ritter's share in the company using her dowry.

Despite the business misfortunes, Karl Benz led in the development of new engines in the early factory he and his wife owned. To get more revenues, in 1878 he began to work on new patents. First, he concentrated all his efforts on creating a reliable petrol two-stroke engine. Benz finished his two-stroke engine on 31 December 1878, New Year's Eve, and was granted a patent for it in 1879.

Karl Benz showed his real genius, however, through his successive inventions registered while designing what would become the production standard for his two-stroke engine. Benz soon patented the speed regulation system, the ignition using sparks with battery, the spark plug, the carburetor, the clutch, the gear shift, and the water radiator. 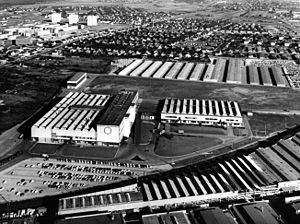 The success of the company gave Benz the opportunity to indulge in his old passion of designing a horseless carriage. Based on his experience with, and fondness for, bicycles, he used similar technology when he created an automobile. It featured wire wheels (unlike carriages' wooden ones) with a four-stroke engine of his own design between the rear wheels, with a very advanced coil ignition and evaporative cooling rather than a radiator. Power was transmitted by means of two roller chains to the rear axle. Karl Benz finished his creation in 1885 and named it "Benz Patent Motorwagen". 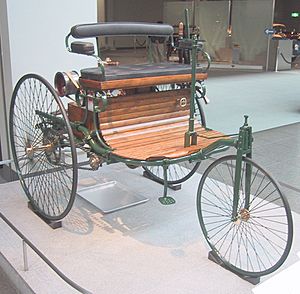 Replica of the Benz Patent Motorwagen built in 1885

It was the first automobile entirely designed as such to generate its own power, not simply a motorized stage coach or horse carriage, which is why Karl Benz was granted his patent and is regarded as its inventor.

The Motorwagen was patented on 29 January 1886 as DRP-37435: "automobile fueled by gas". The 1885 version was difficult to control, leading to a collision with a wall during a public demonstration. The first successful tests on public roads were carried out in the early summer of 1886. The next year Benz created the Motorwagen Model 2, which had several modifications, and in 1889, the definitive Model 3 with wooden wheels was introduced, showing at the Paris Expo the same year.

Benz began to sell the vehicle (advertising it as "Benz Patent Motorwagen") in the late summer of 1888, making it the first commercially available automobile in history.

The early 1888 version of the Motorwagen had no gears and could not climb hills unaided. This limitation was rectified after Bertha Benz made her famous trip driving one of the vehicles a great distance and suggested to her husband the addition of brake linings to act as brake pads.

An important part in the Benz story is this first long distance automobile trip, where the entrepreneurial Bertha Benz, supposedly without the knowledge of her husband, on the morning of 5 August 1888, took this vehicle on a 106 km (66 mi) trip from Mannheim to Pforzheim to visit her mother, taking her sons Eugen and Richard with her. In addition to having to locate pharmacies on the way to fuel up, she repaired various technical and mechanical problems and invented brake lining. After some longer downhill slopes, she ordered a shoemaker to nail leather on the brake blocks.

Bertha Benz and sons finally arrived at nightfall, announcing the achievement to Karl by telegram. It had been her intention to demonstrate the feasibility of using the Benz Motorwagen for travel and to generate publicity in the manner now referred to as live marketing. Today, the event is celebrated every two years in Germany with an antique automobile rally.

In 2008, the Bertha Benz Memorial Route was officially approved as a route of industrial heritage of mankind, because it follows Bertha Benz's tracks of the world's first long-distance journey by automobile in 1888. Now everybody can follow the 194 km of signposted route from Mannheim via Heidelberg to Pforzheim (Black Forest) and back. The return trip was along a different, slightly shorter, itinerary, as shown on the maps of the Bertha Benz Memorial Route.

Benz's Model 3 made its wide-scale debut to the world in the 1889 World's Fair in Paris; about twenty-five Motorwagens were built between 1886 and 1893. 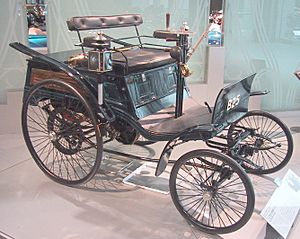 The great demand for stationary, static internal combustion engines forced Karl Benz to enlarge the factory in Mannheim, and in 1886 a new building located on Waldhofstrasse (operating until 1908) was added. Benz & Cie. had grown in the interim from 50 employees in 1889 to 430 in 1899.

During the last years of the nineteenth century, Benz was the largest automobile company in the world with 572 units produced in 1899.

In 1896, Karl Benz was granted a patent for his design of the first flat engine. This design is still used by Porsche, Subaru, and some high performance engines used in racing cars. In motorcycles, the most famous boxer engine is found in BMW Motorrad, though the boxer engine design was used in many other models. 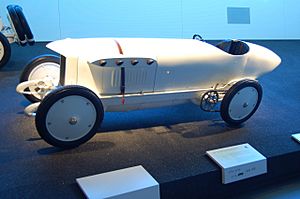 That year, sales of Benz & Cie. reached 3,480 automobiles, and the company remained the leading manufacturer of automobiles.

This company never issued stocks publicly, building its own line of automobiles independently from Benz & Cie., which was located in Mannheim. The Benz Sons automobiles were of good quality and became popular in London as taxis.

During a birthday celebration for him in his home town of Karlsruhe on 25 November 1914, the seventy-year-old Karl Benz was awarded an honorary doctorate by his alma mater, the Karlsruhe University, thereby becoming—Dr. Ing. h. c. Karl Benz.

Almost from the very beginning of the production of automobiles, participation in sports car racing became a major method to gain publicity for manufacturers. At first, the production models were raced and the Benz Velo participated in the first automobile race: Paris to Rouen 1894.

Later, investment in developing racecars for motorsports produced returns through sales generated by the association of the name of the automobile with the winners. Unique race vehicles were built at the time, as seen in the photograph here of the Benz, the first mid-engine and aerodynamically designed, Tropfenwagen, a "teardrop" body introduced at the 1923 European Grand Prix at Monza. 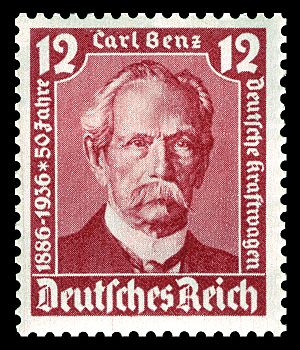 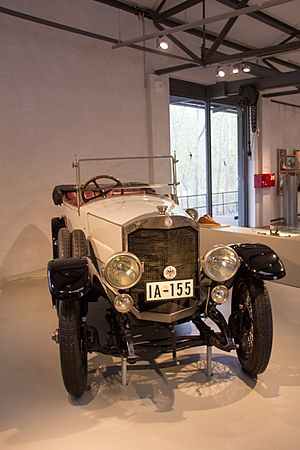 On 4 April 1929, Karl Benz died at home in Ladenburg at the age of eighty-four from a bronchial inflammation. Until her death on 5 May 1944, Bertha Benz continued to reside in their last home. Members of the family resided in the home for thirty more years. The Benz home now has been designated as historic and is used as a scientific meeting facility for a nonprofit foundation, the Gottlieb Daimler and Karl Benz Foundation, that honors both Bertha and Karl Benz for their roles in the history of automobiles.

All content from Kiddle encyclopedia articles (including the article images and facts) can be freely used under Attribution-ShareAlike license, unless stated otherwise. Cite this article:
Karl Benz Facts for Kids. Kiddle Encyclopedia.