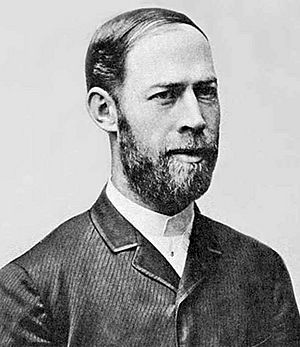 Heinrich Rudolf Hertz (22 February 1857 – 1 January 1894) was a German physicist. In 1888 he discovered the radio waves previously predicted by Maxwell's equations. He also proved that light is a kind of electromagnetic waves. The unit for frequency is named after him.

He died from blood poisoning in 1894.

All content from Kiddle encyclopedia articles (including the article images and facts) can be freely used under Attribution-ShareAlike license, unless stated otherwise. Cite this article:
Heinrich Rudolf Hertz Facts for Kids. Kiddle Encyclopedia.