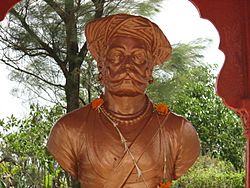 Subedar NarVeer Tanaji Malusare was a Mahratta/Maratha Sardar, who led Maratha forces to a decisive victory in the 'Battle of Sinhgad' (1670 CE)

The term decisive victory refers to a military victory that decides a matter or a conflict. A decisive victory has to result in a positive outcome for the victor and create a condition of peace between the two warring states. By comparison, an inconclusive victory is one in which one side won, but the issues between them are not resolved. A desirable goal for all armies fighting conventional wars is a quick and decisive victory with few casualties. For example, in the Six-Day War that started on 5 June 1967, the Israel Defense Forces (IDF) achieved a decisive victory over the combined armies of Egypt, Syria and Jordan. This established Israel as a regional power in the Middle East with about six years of peace. During the Cold War (1947-1991) the idea of a decisive victory (or any victory) seemed obsolete. Instead, the theory of limited war seemed more practical in the age of nuclear weapons as it would not escalate into a full-scale war that would result in mutual assured destruction.

What makes a victory decisive

In his book On War (Vom Kriege), Carl von Clausewitz stated a decisive victory “is to throw [an] opponent in order to make him incapable of further resistance. War is thus an act of force to compel our enemy to do our will.” He wrote that, to cripple an enemy, a general must find that enemy's "center of gravity". This is the core of what gives an enemy their power. It can be different for different wars and for different enemies, but it is often the enemy's army, people or economy. According to Clausewitz, a war can only end in a decisive victory or it will continue. Clausewitz also wrote: “There is only one decisive victory: the last.”

Sun Tzu (544 BC – 496 BC) also wrote about decisive victory. In his book The Art of War, he wrote: “Therefore the clever combatant imposes his will on the enemy but does not allow the enemy’s will to be imposed on him”. Later in the book he added: “And therefore those skilled in war bring the enemy to the field of battle, and are not brought by him”.

The Battle of Marathon was a decisive victory for the ancient Greeks over the Persians. It marked the end of the first Persian invasion of Greece.

The Battle of Hastings (14 October 1066) was a pitched battle between the Anglo-Saxon English and an invading Norman army. In the battle, the English King Harold Godwinson was killed by an arrow through his eye. The victor, William Duke of Normandy, was crowned as King William I of England 10 weeks later. The Norman conquest was a major turning point in England's history.

Another example of a decisive victory is the Battle of Yorktown (1781) fought at the end of the American Revolutionary War. The American and the French forces defeated the British Army, led by General Lord Charles Cornwallis. Cornwallis believed he could end the rebellion in The Carolinas and Georgia by setting up a fortress and naval base at Yorktown, Virginia. Seeing an opportunity to trap the British on the Virginia Peninsula, American General George Washington and French General Rochambeau marched their armies to Yorktown and established a siege. The French navy prevented the British fleet from reinforcing Cornwallis. A month later Cornwallis surrendered, effectively ending the war.

The World War II Battle of Midway took place from June 4, 1942 to June 7, 1942. It was a decisive victory for the United States Navy over the Japanese Navy. It was the turning point in the war allowing the U.S. forces to go on the offensive against the Japanese. The Japanese fleet commander, Admiral Yamamoto Isoroku, chose to attack Midway Island to draw out the few remaining U.S. Aircraft carriers and ambush them. Unknown to the Japanese, the Americans had been able to decypher their coded messages. Reading the coded messages, they knew what the Japanese plan was. The result was the complete destruction of the Japanese carrier fleet (the Akagi, Kaga, Soryu, and Hiryu) with 322 aircraft and over five thousand sailors. The Americans lost 147 aircraft and about three hundred sailors. While the battle did not directly end the war, it crippled Japanese sea power and ended the Japanese capability to stop the Americans and their allies.

All content from Kiddle encyclopedia articles (including the article images and facts) can be freely used under Attribution-ShareAlike license, unless stated otherwise. Cite this article:
Decisive victory Facts for Kids. Kiddle Encyclopedia.