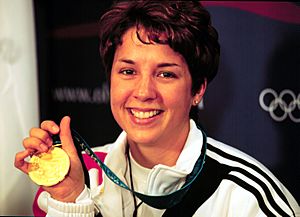 Victory is winning an argument, war or test. Many songs have been made called victory songs. Victory often comes with a lot of emotion. Victory is usually celebrated after winning, although there are many times not to, like after a war. The term comes from the culture of ancient Rome, when it meant winning a war.

In terms of human emotion, being victorious usually brings strong feelings of gladness, and in human behaviour often has movements and victory poses. Victory dances and victory cries are quite similar to war dances and war cries that are done before the violence.

All content from Kiddle encyclopedia articles (including the article images and facts) can be freely used under Attribution-ShareAlike license, unless stated otherwise. Cite this article:
Victory Facts for Kids. Kiddle Encyclopedia.