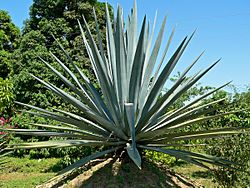 Most agave syrup comes from Mexico and South Africa. 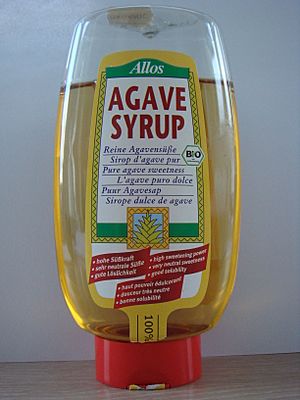 To produce agave syrup from the Agave americana and A. tequilana plants, the leaves are cut off the plant after it has been growing for seven to fourteen years. The juice is then extracted from the core of the agave, called the piña. The juice is filtered, then heated to break the complex components into simple sugars. This filtered juice is then concentrated to a syrupy liquid, slightly thinner than honey. Its color varies from light- to dark-amber, depending on the degree of processing.

Agave salmiana is processed differently from Agave tequiliana. As the plant develops, it starts to grow a stalk called a quiote. The stalk is cut off before it fully grows, creating a hole in the center of the plant that fills with a liquid called aguamiel. The liquid is collected daily. The liquid is then heated, breaking down its complex components into fructose, glucose, and sucrose.

Agave syrup (nectar) is not listed on the inventory of foods generally recognized as safe (GRAS) by the U.S. Food and Drug Administration. 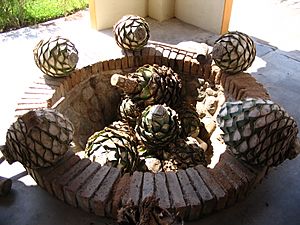 Blue-agave syrup is 1.4 to 1.6 times sweeter than sugar, and may be substituted for sugar or honey in recipes. It is added to some breakfast cereals as a binding agent.

Both amber and dark agave syrups are sometimes used "straight out of the bottle" as a topping for pancakes, waffles, and French toast. The dark version is unfiltered and therefore contains a higher concentration of the agave plant's minerals.

Blue-agave syrup is not recommended for people with fructose intolerance.

All content from Kiddle encyclopedia articles (including the article images and facts) can be freely used under Attribution-ShareAlike license, unless stated otherwise. Cite this article:
Agave nectar Facts for Kids. Kiddle Encyclopedia.