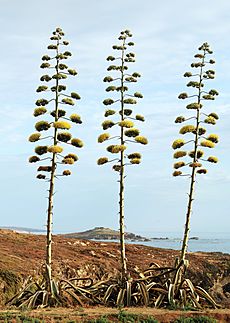 Plant in bloom: the flower stalk may reach up to 8 m (26 ft) in height

Agave americana, common names sentry plant, century plant, maguey or American aloe, is a species of flowering plant in the family Asparagaceae, native to Mexico and the United States in Texas. Today, it is cultivated worldwide as an ornamental plant. It has become naturalized in many regions, including the West Indies, parts of South America, the southern Mediterranean Basin, and parts of Africa, India, China, Thailand, and Australia.

Despite the common name "American aloe", it is not closely related to plants in the genus Aloe. 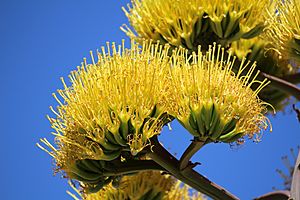 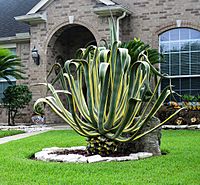 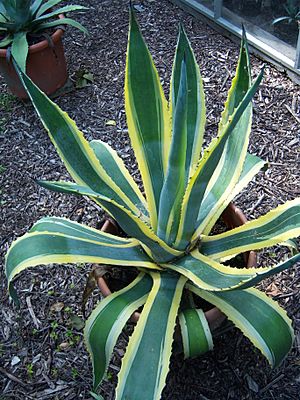 Its common name derives from its semelparous nature of flowering only once at the end of its long life. The plant dies after flowering, but produces suckers or adventitious shoots from the base, which continue its growth.

A. americana was one of the many species described by Carl Linnaeus in the 1753 edition of Species Plantarum, with the binomial name that is still used today.

A. americana is cultivated as an ornamental plant for the large dramatic form of mature plants—for modernist, drought tolerant, and desert-style cactus gardens—among many planted settings. It is often used in hot climates and where drought conditions occur. The plants can be evocative of 18th-19th-century Spanish colonial and Mexican provincial areas in the Southwestern United States, California, and xeric Mexico. It is also a popular landscape plant in dry beach gardens in Florida and coastal areas of the Southeastern United States.

Two subspecies and two varieties of Agave americana are recognized by the World Checklist of Selected Plant Families:

(those marked agm, as well as the parent species, have gained the Royal Horticultural Society's Award of Garden Merit). 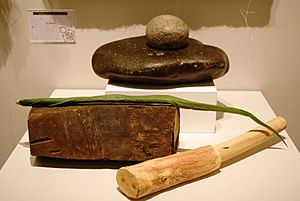 If the flower stem is cut before flowering, a sweet liquid called aguamiel ("honey water") gathers in the hollowed heart of the plant. This can be fermented to produce the alcoholic drink called pulque. The leaves also yield fibers, known as pita, which are suitable for making rope, matting, or coarse cloth. They are also used for embroidery of leather in a technique known as piteado. Both pulque and maguey fiber were important to the economy of pre-Columbian Mexico, where the fermented drink was known as octli.

In the tequila-producing regions of Mexico, agaves are called mezcales. The high-alcohol product of fermented agave distillation is called mezcal; A. americana is one of several agaves used for distillation. A mezcal called tequila is produced from Agave tequilana, commonly called "blue agave". The many different types of mezcal include some which may be flavored with the very pungent mezcal worm. Mezcal and tequila, although also produced from agave plants, are different from pulque in their technique for extracting the sugars from the heart of the plant, and in that they are distilled spirits. In mezcal and tequila production, the sugars are extracted from the piñas (or hearts) by heating them in ovens, rather than by collecting aguamiel from the plant's cut stalk. Thus, if one were to distill pulque, it would not be a form of mezcal, but rather a different drink.

Agave nectar is marketed as a natural form of sugar with a low glycemic index that is due to its high fructose content.

The plant figures in the coat of arms of Don Diego de Mendoza, a Native American governor of the village of Ajacuba, Hidalgo.

All content from Kiddle encyclopedia articles (including the article images and facts) can be freely used under Attribution-ShareAlike license, unless stated otherwise. Cite this article:
Agave americana Facts for Kids. Kiddle Encyclopedia.