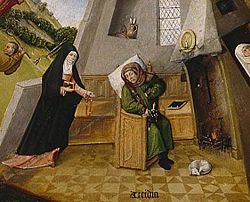 Accidia in The Seven Deadly Sins and the Four Last Things, by Hieronymus Bosch.

In Christianity, Sloth is about a person not wanting to work, because of lack of motivation. The person will be physically inactive and neglect what God has said. Very often, this will lead to resources being wasted. As an example, sloth is about a person not helping those in need, even though they would be able to. Sloth is one of the seven capital sins, which are also called seven deadly sins.

For Protestants, Diligence (or hard work) is one of the ways to plese God. Max Weber (1864-1920) treats this in his work The Protestant Ethic and the Spirit of Capitalism. In his work "Anthropologie in pragmatischer Hinsicht", Immanuel Kant stated that of the capital sins sloth, cowardice and falsehood, the first one is the most despicable. However, he also sees this as a mesure of self-protectiom of the individual, as long phases of hard work will lead a person to become tired, and to make short pauses between intervals of work. Without these pauses, the restles malice that is in the world would do a far greater amount of damage. In 1846, Louis Blanc wrote about the right to work. There was a financial crisis at the time, and many people were unemployed. The crisis led to the French Revolution of 1848. In 1880, the Socialist Paul Lafargue published an essay called The Right to be Lazy, where he explains that the worker should have a right to be lazy.

All content from Kiddle encyclopedia articles (including the article images and facts) can be freely used under Attribution-ShareAlike license, unless stated otherwise. Cite this article:
Sloth (deadly sin) Facts for Kids. Kiddle Encyclopedia.