Kids Encyclopedia Facts
For the nearby ghost town and other uses, see Canyon Diablo, Arizona, and Canyon Diablo (disambiguation). 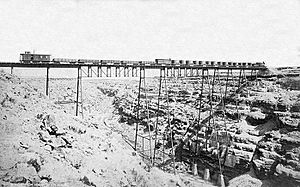 Canyon Diablo (Navajo: Kin Łigaaí) is a canyon near Two Guns in Northern Arizona. Part of it is located on the Navajo Nation.

Canyon Diablo was named by U.S. Army Lieutenant Amiel Weeks Whipple. Whipple, of the Army's Topographical Engineers, made a survey in 1853–1854 along the 35th parallel. In mid December 1853 Whipple found a steep canyon while riding west from a point near Winslow with a reconnaissance party. He named the canyon Canyon Diablo.

The canyon passes three miles (5 km) west of Meteor Crater. The community of Canyon Diablo, Arizona on the edge of the canyon about 12 miles (19 km) northwest of the crater was the closest community to the crater when scientists began investigating the crater. Consequently, the meteorite that caused the crater is officially called the Canyon Diablo meteorite.

Canyon Diablo ("devil canyon") is the Spanish translation of the Native American name. The Canyon Diablo Bridge, once used by U.S. Route 66 to cross the canyon south of the present I-40 bridges, is on the National Register of Historic Places.

All content from Kiddle encyclopedia articles (including the article images and facts) can be freely used under Attribution-ShareAlike license, unless stated otherwise. Cite this article:
Canyon Diablo (canyon) Facts for Kids. Kiddle Encyclopedia.