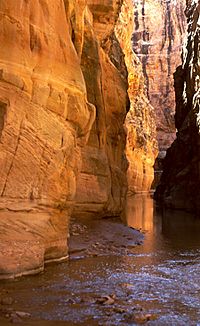 Cedar Mesa Sandstone (analogous to the Coconino Sandstone) at the Chute of Muddy Creek, Utah 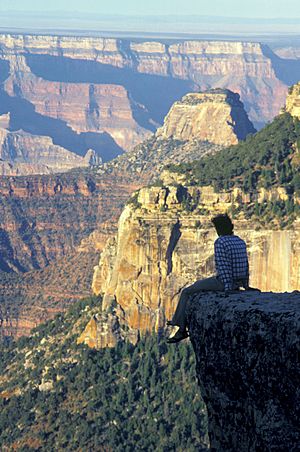 The Coconino Sandstone forms the two prominent white cliffs in the middle distance in this view from the South Rim of the Grand Canyon.

Coconino Sandstone is a geologic formation named after its exposure in Coconino County, Arizona. This formation spreads across the Colorado Plateau province of the United States, including northern Arizona, northwest Colorado, Nevada, and Utah. 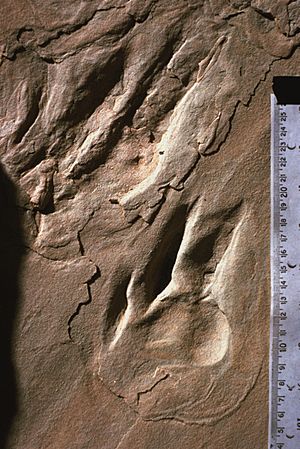 Vertebrate tracks known as Chelichnus gigas from the Coconino Sandstone in Grand Canyon.

This rock formation is particularly prominent in the Grand Canyon, where it is visible as a prominent white cliff-forming layer. The thickness of the formation varies due to regional structural features; in the Grand Canyon area it is only 65 feet (20 m) thick in the west, thickens to over 600 feet (180 m) in the middle and then thins to 57 feet (17 m) in the east. Either the Kaibab Limestone or Toroweap Formation overlies the Coconino Sandstone. The Coconino Sandstone is typically buff to white in color. It consists primarily of fine well-sorted quartz grains, with minor amounts of potassium feldspar grains deposited by eolian processes (wind-deposited) approximately 275 million years ago. Several structural features such as ripple marks, sand dune deposits, rain patches, slump marks, and fossil tracks are not only well preserved within the formation, but also contribute evidence of its eolian origin.

Lechatelierite (silica glass), as well as coesite and stishovite (high pressure forms of SiO2) were formed during the impact of a meteorite into the Coconino Sandstone at Barringer Crater in Arizona. 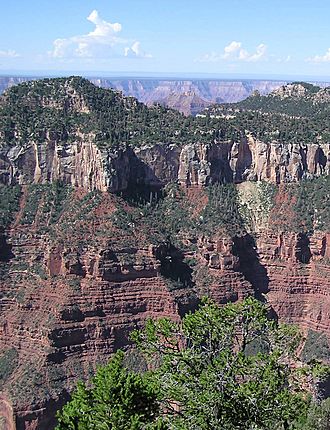 All content from Kiddle encyclopedia articles (including the article images and facts) can be freely used under Attribution-ShareAlike license, unless stated otherwise. Cite this article:
Coconino Sandstone Facts for Kids. Kiddle Encyclopedia.