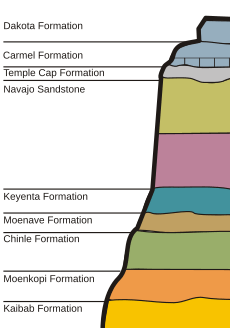 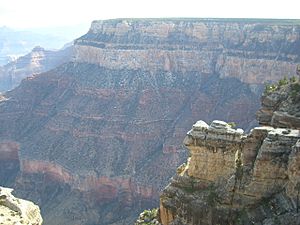 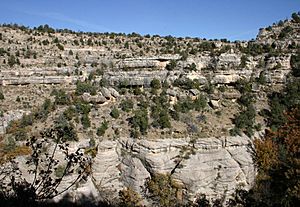 The Kaibab Limestone is an assemblage of sedimentary rock types. It consists of a complexity of inter fingering and inter bedded carbonate and siliciclastic sedimentary rocks. In addition, intense post-depositional (diagenetic) changes have created more composition variation by the alteration of limestone to dolomite and the silicification of limestone to form chert. In the western Grand Canyon region, the Fossil Mountain Member consists of fossiliferous and cherty limestone with an abundant and diverse normal-marine fossil fauna. Further east in the Coconino Plateau region, the lithology, mineralogy, and fauna of the Fossil Mountain Member changes drastically where it grades laterally into sandy dolomite and dolomite that contains a restricted-marine fossil fauna and subordinate amounts of sandstone. The Harrisburg Member, which forms the uppermost cliffs and receding ledges along both north and south rims of the Grand Canyon, consists of an assemblage of gypsum, dolomite, sandstone, redbeds, chert, and minor limestone.

Within the Grand Canyon region, the Kaibab Limestone overlies gypsum and contorted sandstones of the Toroweap Formation. Originally, geologists interpreted the lower contact of the Kaibab Limestone to be an unconformity based on the presence of local intraformational breccias and erosional surfaces. However, additional research has concluded that these local intraformational breccias and erosional surfaces are the result of collapse following the dissolution of evaporite deposits within the upper part of the Toroweap Formation. As a result, this contact is inferred to be conformable or only locally a disconformity. South and east of the Grand Canyon, the evaporites and contorted sandstones (sabkha deposits) of Toroweap Formation interfinger with and are replaced by cross-bedded sandstones of the Coconino Sandstone. As a result, the Kaibab Limestone directly overlies the Coconino Sandstone in the Mogollon Rim region. The Kaibab Limestone directly overlies the White Rim Sandstone in northeastern Arizona and southeastern Utah.

The upper contact of the Kaibab Limestone (Harrisburg Member) with the overlying Moenkopi Formation is an erosional unconformity and disconformity. Within northwestern Arizona, southeastern Nevada, and southwestern Utah this contact is an erosional unconformity that in part consists of paleovalleys, as much as several hundred feet deep, and paleokarst that were eroded into the underlying Kaibab Limestone before the deposition of the Moenkopi Formation. These paleovalleys are often filled with conglomerates and breccias that are known as the Rock Canyon conglomerate. Within the Marble Canyon and eastern Grand Canyon regions and south into Verde Valley, upper contact of the Kaibab Limestone with the Moenkopi Formation is an erosional disconformity. This disconformity exhibits little relief and is identified by marked differences in color, topography, and rock types between tan, ledge-forming, calcareous sandstones and of the Kaibab Limestone and red, slope-forming siltstones of the Moenkopi formation. The unconformity and disconformity are inferred to represent most of Permian time (including the Leonardian) and part of Early Triassic time.

The complex intercalation of carbonate and clastic sediments within the Kaibab Limestone reflects the deposition of sediments within a gently sloping continental margin during a period of frequent, high-frequency sea level changes. Relatively minor changes in sea level caused major lateral shifts in the position of supratidal, subtidal, and shallow-marine environments during the deposition of the Kaibab Limestone. The shifting sea levels and associated depositional environments created a complex interlayering of different types of carbonate and clastic sediments in the strata that comprise the Kaibab Limestone. The gently sloping continental margin on which the Kaibab Limestone accumulated, extended seaward from northern Arizona to southern Nevada, at times exceeding 200 miles (125 km) in width. It is most likely that the high-frequency changes in sea level were caused by glacial sea level oscillations during this time period.

Early paleontological studies of the Kaibab Limestone firmly established its age on the basis of the abundant fossils that it and the underlying Toroweap Formation contain. On the basis of its brachiopod and siliceous sponge faunas, it was initially concluded that it is Leonardian (approximately Kungurian / latest Early Permian) in age. Later research concerning conodonts and associated megafossils obtained from western outcrops of the Fossil Mountain Member indicates that its age extends into the Roadian (latest Early Permian and earliest Middle Permian) age.

All content from Kiddle encyclopedia articles (including the article images and facts) can be freely used under Attribution-ShareAlike license, unless stated otherwise. Cite this article:
Kaibab Limestone Facts for Kids. Kiddle Encyclopedia.