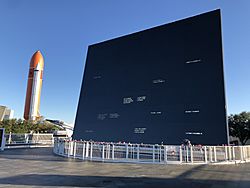 The Space Mirror Memorial, which forms part of the larger Astronauts Memorial, is a National Memorial on the grounds of the John F. Kennedy Space Center Visitor Complex on Merritt Island, Florida. It is maintained by the Astronauts Memorial Foundation (AMF), whose offices are located in the NASA Center for Space Education next door to the Visitor Complex. The memorial was designed in 1987 by Holt Hinshaw Pfau Jones, and dedicated on May 9, 1991, to remember the lives of the men and women who have died in the various space programs of the United States, particularly those of NASA. The Astronauts Memorial has been designated by the U.S. Congress "as the national memorial to astronauts who die in the line of duty" (Joint Resolution 214, 1991).

In addition to 20 NASA career astronauts, the memorial includes the names of a U.S. Air Force X-15 test pilot, a U.S. Air Force officer who died while training for a then-classified military space program, a civilian spaceflight participant who died in the Challenger disaster, and an Israeli astronaut who was killed in the Columbia disaster.

In July 2019, the AMF unanimously voted to include private astronauts on the memorial, recognizing the important contributions made to the American space program by private spaceflight crew members. The first civilian to be added to the wall was Scaled Composites pilot Michael T. Alsbury, who died in the crash of SpaceShipTwo on October 31, 2014. His name was added to the memorial on January 25, 2020. 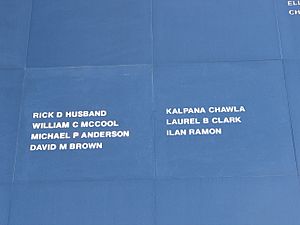 The primary feature of the memorial is the Space Mirror, a flat expanse of polished black granite, 42.5 feet high by 50 feet wide, divided into 90 smaller panels. The names of the 25 astronauts who have died are scattered over the mirror, with names of astronauts who died in the same incident grouped on the same panel, or pairs of adjacent panels. The names are cut completely through the surface, exposing a translucent backing, and filled with translucent acrylic, which is then backlit with LED lights, causing the names to glow, and appear to float in a reflection of the sky.

Near the Space Mirror is a granite wall, bearing pictures and brief biographies of those listed on the Mirror. The Space Mirror Memorial was designed by Wes Jones of Holt Hinshaw Pfau Jones and was commissioned after he won an international design competition.

The memorial as built incorporated motors and jackscrews to constantly track the Sun across the sky in both pan and tilt axes. Parabolic reflectors on the back side of the mirror would then direct the sunlight through the acrylic panels to brilliantly illuminate the honorees' names with sunlight. Supplemental floodlights were used when the sunlight was inadequate.

In 1997, the tracking system failed, allowing part of the monument to strike a steel beam on an adjacent platform. Insurance paid $375,000 for repair work, but later, the mechanism again ground to a halt, due to further problems with the slewing ring.

Estimated cost of repairs was around $700,000, and the Astronauts Memorial Foundation unanimously decided the money would be better spent on educational programs instead. The floodlights were repositioned and are kept burning 24 hours a day to illuminate the memorial.

The memorial was to be partially funded by the sales of "Space Shots" trading cards. An agreement was made for 25% of Space Shots profits, in exchange for guaranteeing a $160,000 loan. A projected $400,000 was owed to the Foundation, which was never paid.

The Space Mirror Memorial and the Astronauts Memorial Foundation are funded in part by a specialty vehicle registration plate issued by the state of Florida. Called the Challenger plate, it was first issued in 1987, and was the first specialty plate issued by the state. The third edition, introduced in 2004, includes Columbia in the text, and is now termed the Challenger/Columbia plate. License plates brought in $377,000 in 2009.

One quarter of the revenue from the Apollo 11 Fiftieth Anniversary commemorative coins will go to the Astronauts Memorial Foundation.

The people honored on the memorial are:

The president of the Astronaut Memorial Foundation was Stephen Feldman from 1999 to 2012. He was paid $303,000 annually. This was criticized as being the highest among 100 of Brevard County non-profits. His salary represented 18.3 percent of the fund's $1.8 million budget in fiscal year 2009. He defended his salary by saying that he was the sole fundraiser and the chief financial officer for the foundation.

All content from Kiddle encyclopedia articles (including the article images and facts) can be freely used under Attribution-ShareAlike license, unless stated otherwise. Cite this article:
Space Mirror Memorial Facts for Kids. Kiddle Encyclopedia.