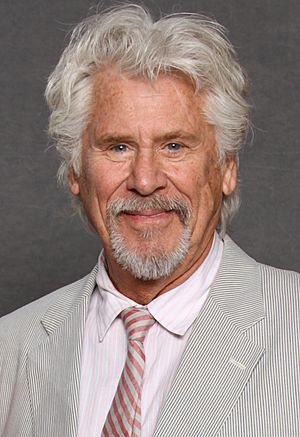 Barry Knapp Bostwick (born February 24, 1945) is an American actor, voice artist, and comedian, best known for portraying Brad Majors in The Rocky Horror Picture Show (1975). He replaced Peter Scolari as Mr. Tyler in What I Like About You, as well as portraying Mayor Randall Winston in Spin City and the father of the President in Scandal. Bostwick has also had considerable success in musical theater. He voiced Thunderbolt in 101 Dalmatians II: Patch's London Adventure.

All content from Kiddle encyclopedia articles (including the article images and facts) can be freely used under Attribution-ShareAlike license, unless stated otherwise. Cite this article:
Barry Bostwick Facts for Kids. Kiddle Encyclopedia.