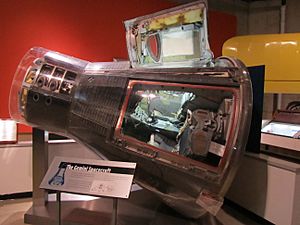 The Armstrong Air & Space Museum, also referred to as the Armstrong Museum, is a museum in Wapakoneta, Ohio, the hometown of aviator and astronaut Neil Armstrong, the first man to set foot on the Moon. Opened in 1972, the museum chronicles Ohio's contributions to the history of aeronautics and space flight. The museum is home to a substantial collection of nationally relevant artifacts that include an F5D Skylancer, the original Gemini 8 spacecraft piloted by Armstrong to perform the world's first space docking, two of Armstrong's space suits, multiple items from the Apollo Program missions, and a Moon rock brought back during the Apollo 11 mission. The museum has several main galleries that cover the early beginnings of the Space Race, all the way to the end of the Space Shuttle Era. In the museum's Astro-theater, multimedia presentations and documentaries are cast upon the dome's famous interior structure.

The Armstrong Museum is a member site in a larger network of museums and destinations owned by the Ohio History Connection. The National Aviation Heritage Area (NAHA) lists the Armstrong Air & Space Museum as one of its partner organizations, citing its preservation of historically relevant material related to the history of aerospace. While the museum bears the name of the famed Apollo 11 astronaut, Armstrong had no formal connection with the museum nor did he benefit from the organization in any way.

The F5D Skylancer on display outside the museum

Neil Alden Armstrong was born on August 5, 1930, on his grandparents' farm, in Washington Township, Auglaize County, near Wapakoneta to Stephen and Viola Armstrong. Neil was the oldest of the Armstrong's three children. Stephen Armstrong was an auditor and was tasked with examining the books from different Ohio counties. The family moved over thirteen times during Neil's childhood, eventually settling back down in Wapakoneta in the mid-1940s. During Armstrong's life in Wapakoneta, he graduated high school and received his pilots license from the now defunct Port Koneta Airfields located on the North end of Wapakoneta. After graduation, Neil went to college at Purdue University to study aeronautical engineering. His schooling was interrupted when the Navy called upon Armstrong to fight in the Korean War conflict. 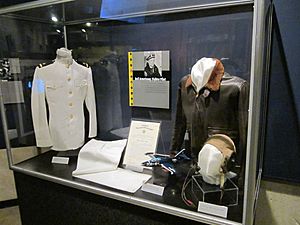 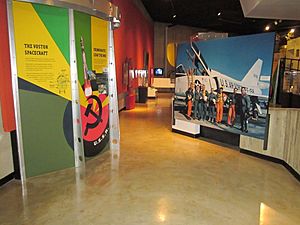 At the time of Neil Armstrong's first step onto the Moon, then Ohio Governor James Rhodes proposed to build a museum in Armstrong's hometown of Wapakoneta in his honor. The museum also was to honor "all Ohioans who have attempted to defy gravity."

Through Governor Rhodes, the State of Ohio pledged $500,000 dependent on local matching funds. A total of $528,313.55 was raised by Wapakoneta residents and other interested parties, including school children who held fund-raising drives." Groundbreaking took place in 1970. The design was unique with earth mounded around the steel-reinforced concrete building, giving the building the semblance of being underground." Its distinguishing feature is a large globe dome that houses the Astro Theater. On July 20, 1972, three years after the historic Moon landing, the museum held its grand opening, honored by the attendance of Armstrong and of Tricia Nixon Cox, standing in for her father, Richard M. Nixon, President of the United States."

Late at night on July 28, 2017, a solid gold replica of an Apollo Lunar Module was stolen.

In August 2020, the first production Learjet 28, which was used by Neil Armstrong to set five aerospace records, was donated to the museum. 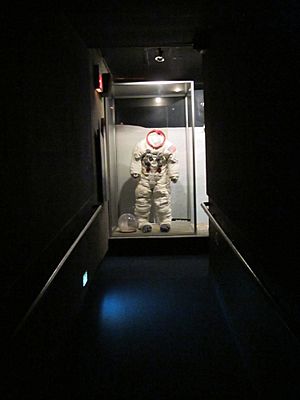 The museum is designed for the experiential learner. There are several interactive exhibits, ten audio/visual elements, and two simulators.

All content from Kiddle encyclopedia articles (including the article images and facts) can be freely used under Attribution-ShareAlike license, unless stated otherwise. Cite this article:
Armstrong Air and Space Museum Facts for Kids. Kiddle Encyclopedia.