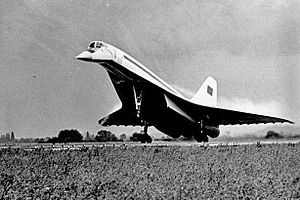 The Tupolev Tu-144 was the first airliner that flew faster than the speed of sound. Built in USSR by Tupolev it is similar to the Concorde. Tupolev Tu-144 flown only for Aeroflot the national soviet airline. Sixteen examples only were built. Maiden flight was on December 31, 1968.

All content from Kiddle encyclopedia articles (including the article images and facts) can be freely used under Attribution-ShareAlike license, unless stated otherwise. Cite this article:
Tupolev Tu-144 Facts for Kids. Kiddle Encyclopedia.