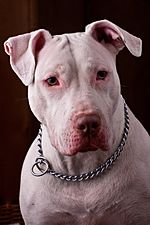 The American Pit Bull Terrier is a dog breed. It is a medium-sized, solidly-built, short-haired dog. Its early ancestors came from the British Isles. Originally they were bred for fighting. As early as the 13th century in Great Britain, blood sports were popular. These included bull-baiting and bear-baiting where dogs would fight against these larger animals to entertain the crowds. In the 1800s, when baiting became illegal, the dogs fought each other. Pit bulls are not always aggressive despite their bad reputation. Some owners describe them as clowns and goofballs. Depending on how they are raised and treated, they can make very good family pets.

All content from Kiddle encyclopedia articles (including the article images and facts) can be freely used under Attribution-ShareAlike license, unless stated otherwise. Cite this article:
American Pit Bull Terrier Facts for Kids. Kiddle Encyclopedia.