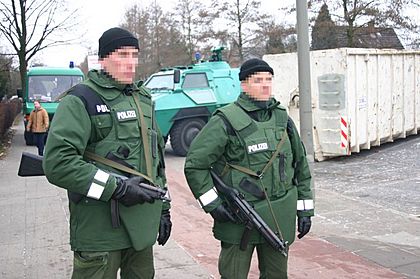 A bullet-proof vest (also called "bulletproof vest", "body armor" or "body armour") is a protective piece of clothing that covers the torso (chest, abdomen, and back) of a person. It protects the wearer from most pistol and revolver bullets and from fragments of explosive devices such as grenades. Bullet-proof vests are worn by police officers, soldiers, security guards, and people who are at risk of being shot (such as the leader of a country).

How do they work?

Bullet-proof vests contain many layers of tightly-woven fabric such as Kevlar (or hard, strong materials such as ceramic or titanium) which can stop the metal pistol or revolver bullets or metal shell fragments from going into a person's body.

How much protection does a bullet-proof vest provide?

When a bullet hits a bullet-proof vest, the forceful impact of the bullet can seriously hurt the person wearing the vest even if the vest stops the bullet.

A bullet from a strong sniper or machine gun can pierce a bullet-proof vest.

If a bullet hits a body part that the bullet-proof vest does not cover, the bullet can hurt or kill the person wearing the vest.

The bullet-proof vests worn by most police officers and security guards are made with many layers of tightly-woven fabric such as Kevlar.

All content from Kiddle encyclopedia articles (including the article images and facts) can be freely used under Attribution-ShareAlike license, unless stated otherwise. Cite this article:
Bullet-proof vest Facts for Kids. Kiddle Encyclopedia.