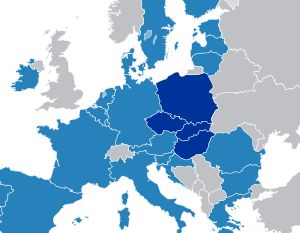 Map of the Visegrád Four

The Visegrád Group (also the Visegrád Four or V4) is a group of four Сentral European countries: the Czech Republic, Hungary, Poland and Slovakia. It was created in 1991 in Visegrád, Hungary for the purposes of better cooperation among these countries.

All content from Kiddle encyclopedia articles (including the article images and facts) can be freely used under Attribution-ShareAlike license, unless stated otherwise. Cite this article:
Visegrád Group Facts for Kids. Kiddle Encyclopedia.