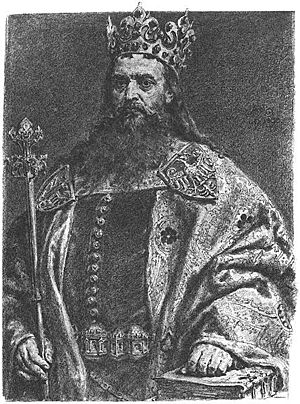 Casimir III the Great (Polish: Kazimierz III Wielki) (April 30, 1310 – November 5, 1370) was the King of Poland from 1333 until 1370. He was the son of Wladyslaw I the Short. He was the last king of the Piast dynasty, his daughter Jadwiga having married the Lithuanian duke Wladyslaw Jagiello.

Casimir III is the only Polish king to ever receive the title of "the Great". His reign was a time of prosperity and growth for the Polish kingdom. He focused on the economy and strengthening of the country and not on wars and expansion. He kept peace with the Teutonic Order during his reign, for he knew that Poland was weak and would not survive the confrontation with the knights. Because of that, he focused his attention on the south-eastern borders of the country and expanded there. In 1340, he conquered Red Ruthenia (Lviv along with it) from Hungary. Various trade laws created by him made it easier for Polish cities to gather more wealth. Cracow and Lviv gained in importance during his reign.

All content from Kiddle encyclopedia articles (including the article images and facts) can be freely used under Attribution-ShareAlike license, unless stated otherwise. Cite this article:
Casimir III of Poland Facts for Kids. Kiddle Encyclopedia.