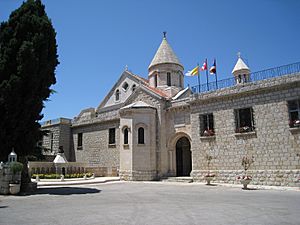 Headquarters of the Church, in Bzoummar.

The Armenian Catholic Church is an Eastern Catholic church sui juris within the Catholic Church. Its headquarters are in Bzoummar, Lebanon. The union was established in the Council of Florence, in 1439. During the Armenian Genocide, 1915-1918, its followers were scattered, mainly to Syria and Lebanon. Many Armenians also fled to Georgia and Ukraine. In 1991, after the fall of the Iron Curtain, Pope John Paul II merged the churches in Georgia and Ukraine with those in Armenia. He created a new eparchy of Armenia and Eastern Europe. There is a seminary in Gyumri, the largest city in Armenia. At the same time Catholic Armenians in Georgia de facto entered this newly formed diocese.The city of Gymuri was chosen because most Catholic Armenians live in the north of the country.

Many Armenians emigrated to the United States and Canada, mainly in the 1970s. For this reason, Pope Benedict XVI created a diocese for these people. It is responsible for about 35.000 people in the US, and about 10.000 in Canada.

The current Patriarch of the church is Nerses Bedros XIX Tarmouni.

All content from Kiddle encyclopedia articles (including the article images and facts) can be freely used under Attribution-ShareAlike license, unless stated otherwise. Cite this article:
Armenian Catholic Church Facts for Kids. Kiddle Encyclopedia.