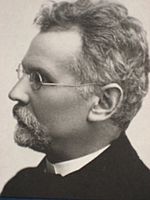 He was born in Hrubieszów and died in Warsaw. As a 15-year-old high-school student, he fought in Poland's January 1863 Uprising.

Prus is best known for his novels, Lalka (The Doll) and the historical novel Faraon (Pharaoh). He also wrote "Anielka," Placówka (The Outpost), Emancypantki (The New Woman), and many other stories and novels. He was an advocate of Positivist philosophy and social progressivism.

Prus is regarded as one of the greatest Polish writers, and one of the world's most prominent.

All content from Kiddle encyclopedia articles (including the article images and facts) can be freely used under Attribution-ShareAlike license, unless stated otherwise. Cite this article:
Bolesław Prus Facts for Kids. Kiddle Encyclopedia.