Jan Kochanowski (1530-1584) was a Polish Renaissance poet, translator and playwright. He is generally regarded as one of the the greatest poets in Polish literature. 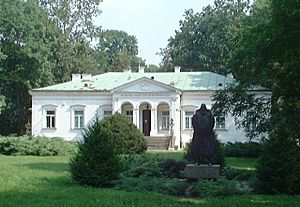 Jan Kochanowski was born into a noble family in the village of Sycyna, Poland. His parents were Piotr Kochanowski, a lawyer and judge, and Anna Białaczowska. They had 11 children, two of which were also writers. He studied at the University in Cracow, he then attended the University of Königsberg, in Ducal Prussia, and Padua University in Italy.

He returned to Poland in 1559. In 1563 he became a secretary at the royal court of Sigismund II Augustus. He married around 1575 and settled at the family estate. He died of a heart attack in 1584 in the town of Lublin.

Jan Kochanowski wrote in Polish and Latin, he greatly enriched Polish poetry. Many of his poems have been translated into English.

All content from Kiddle encyclopedia articles (including the article images and facts) can be freely used under Attribution-ShareAlike license, unless stated otherwise. Cite this article:
Jan Kochanowski Facts for Kids. Kiddle Encyclopedia.