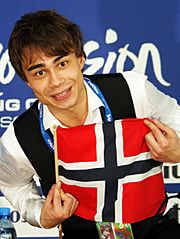 Alexander Rybak (13 May 1986) is a Belarusian-Norwegian singer, composer and violinist. He was born in Minsk, Belarusian SSR. He moved to Norway when he was four. He is best known for winning the Eurovision Song Contest 2009 with the song "Fairytale" for Norway. Rybak went to the Eurovision Song Contest 2010 in Oslo to perform his winning entry from the previous year.

All content from Kiddle encyclopedia articles (including the article images and facts) can be freely used under Attribution-ShareAlike license, unless stated otherwise. Cite this article:
Alexander Rybak Facts for Kids. Kiddle Encyclopedia.