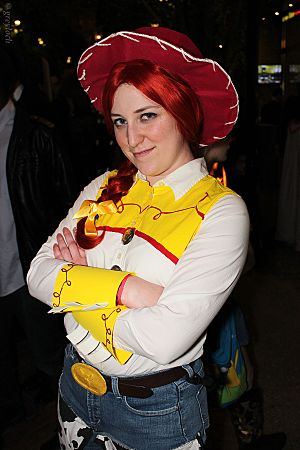 A cosplayer dressed up as Jessie.

Jessie is a character of the Toy Story franchise, starting with Toy Story 2 (1999). She is a member of Woody's Roundup as shown in the TV show. She is voiced by Joan Cusack.

Jessie was owned by Emily who grew older and decided to donate her to the tri-county area. She was collected by Al McWhiggin who also owned Bullseye and Stinky Pete the Prospector. They later met Woody, who was owned by Andy.

All content from Kiddle encyclopedia articles (including the article images and facts) can be freely used under Attribution-ShareAlike license, unless stated otherwise. Cite this article:
Jessie (Toy Story) Facts for Kids. Kiddle Encyclopedia.