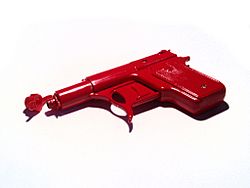 A typical factory-made toy die-cast spud gun. The cap attached to the muzzle converts it into a water pistol.

A potato gun or Potato cannon is a type of cannon that uses combustion or air pressure to fire a projectile. They are called potato guns because potatoes are a commonly used projectile.

There are two main types of potato guns. Combustion guns use a flammable fuel and igniter to move an object. Another type uses compressed air. Potato guns are usually built of PVC or ABS (a type of plastic) piping.

Combustion potato guns have 4 parts. These are the barrel, combustion chamber, a cap, and an igniter.

A potato cannon can move a 2" diameter potato projectile over 100 yards at a speed of 40 mph. This makes potato guns dangerous.

A air powered potato cannon is much stronger than a combustion cannon. A combustion potato gun will launch projectiles at a pressure of about 10-20 psi. Air powered guns often use pressures over 100 psi.

All content from Kiddle encyclopedia articles (including the article images and facts) can be freely used under Attribution-ShareAlike license, unless stated otherwise. Cite this article:
Potato gun Facts for Kids. Kiddle Encyclopedia.