Play-Doh (similar to "dough") is a modeling compound used by young children for arts and crafts projects at home. It is composed of flour, water, salt, borax, and mineral oil. The product was first manufactured in Cincinnati, Ohio, United States, as a wallpaper cleaner in the 1930s. The product was reworked and marketed to Cincinnati schools in the mid-1950s. Play-Doh was demonstrated at an educational convention in 1956 and prominent department stores opened retail accounts. Advertisements promoting Play-Doh on influential children's television shows in 1957 furthered the product's sales. Since its launch on the toy market in the mid-1950s, Play-Doh has generated a considerable amount of ancillary merchandise such as The Fun Factory. In 2003, the Toy Industry Association named Play-Doh in its "Century of Toys List". 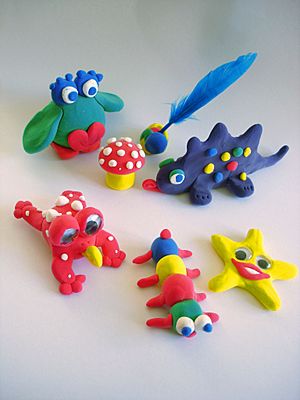 Objects made out of Play-Doh.

The non-toxic, non-staining, reusable modeling compound that came to be known as "Play-Doh" was a pliable, putty-like substance concocted by Noah McVicker of Cincinnati-based soap manufacturer Kutol Products. It was devised at the request of Kroger Grocery, which wanted a product that could clean coal residue from wallpaper. Following World War II, with the transition from coal-based home heating to natural gas and the resulting decrease in internal soot, and the introduction of washable vinyl-based wallpaper, the market for wallpaper cleaning putty decreased substantially. McVicker's nephew, Joe McVicker, joined Kutol with the remit to save the company from bankruptcy. Joe McVicker was the brother-in-law of nursery school teacher Kay Zufall, who had seen a newspaper article about making art projects with the wallpaper cleaning putty. Her students enjoyed it, and she persuaded Noah McVicker (who also sold the putty) and Joe McVicker to manufacture it as a child’s toy. Zufall and her husband came up with the name Play-Doh; Joe McVicker and his uncle Noah had wanted to call it "Rainbow Modeling Compound".

Joe McVicker took Play-Doh to an educational convention for manufacturers of school supplies, and Woodward & Lothrop, a department store in Washington, DC began selling the compound. In 1956, the McVickers formed the Rainbow Crafts Company to make and sell Play-Doh. Also in 1956, a three-pack of 7-ounce cans was added to the product line, and, after in-store demonstrations, Macy's of New York and Marshall Field's of Chicago opened retail accounts. In 1957, chemist Dr. Tien Liu reduced Play-Doh's salt content (thus allowing models to dry without losing their color), and Play-Doh ads were telecast on Captain Kangaroo, Ding Dong School, and Romper Room. In 1958, Play-Doh's sales reached nearly $3 million.

In 1964, Play-Doh was exported to Britain, France, and Italy. In the 1980s, its cardboard can (with a rust-prone metal bottom) was replaced with a more cost effective plastic container. By 1965, Rainbow Crafts was issued a patent for Play-Doh. Also in 1965, General Mills purchased Rainbow Crafts and all rights to Play-Doh for $3 million, placing the compound with its Kenner Products subsidiary. In 1971, Rainbow Crafts and Kenner Products merged, and, in 1987, the Tonka Corporation bought the two. In 1991, Hasbro became Play-Doh's owner, and continues to manufacture the product today through its preschool division. In 1996, gold and silver were added to Play-Doh's palette to celebrate its 40th anniversary. 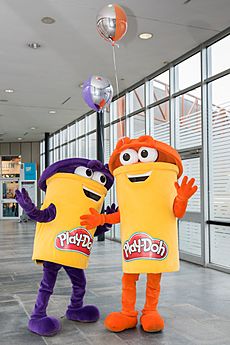 Play-Doh packaging was briefly illustrated with children in the mid-1950s, but replaced by the Play-Doh pixie, an elf mascot which, in 1960, was superseded by Play-Doh Pete, a smock and beret-wearing cartoonish boy. By 2002, Play-Doh Pete's beret had been replaced with a baseball cap. Since 2011, living Play-Doh cans named the Doh-Dohs have been seen in advertisements.

Play-Doh's current manufacturer, Hasbro, reveals the compound is primarily a mixture of water, salt, and flour, while its 2004 United States patent indicates it is composed of water, a starch-based binder, a retrogradation inhibitor, salt, lubricant, surfactant, preservative, hardener, humectant, fragrance, and color. A petroleum additive gives the compound a smooth feel, and borax prevents mold from developing. Play-Doh contains some wheat and may cause allergic reactions in people who are allergic to wheat gluten. It is not intended to be eaten. 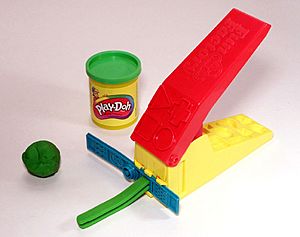 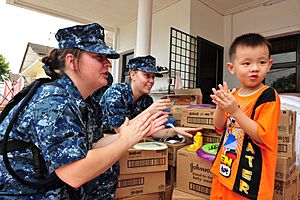 Play-Doh was inducted into the National Toy Hall of Fame at The Strong in Rochester, New York, in 1998.

In 2003, the Toy Industry Association placed Play-Doh into its "Century of Toys List", a roll call of the 100 most memorable and most creative toys of the twentieth century.

In late 2014, the company offered to replace the "Play-Doh Cake Mountain" playset's extruder tool, for free, after receiving complaints about the tool's "phallic shape".

In April 2, 2015, 20th Century Fox announced to work on a movie with Hasbro Studio along with the subsidiary company Allspark Pictures and Chernin Entertainment producing, Jason Micallef writing, and Paul Feig directing from his production company Feigco.

All content from Kiddle encyclopedia articles (including the article images and facts) can be freely used under Attribution-ShareAlike license, unless stated otherwise. Cite this article:
Play-Doh Facts for Kids. Kiddle Encyclopedia.