A Furby (plural Furbys or Furbies, according to Tiger. Co.) is a popular electronic toy or robot, more specifically, a hamster/owl-like creature made by Tiger Electronics, which went through a time of being the "must-have" toy following its launch in the winter holiday season of 1998, with continuing sales until 2000. Furbies sold 1.8 million units in 1998, 14 million units in 1999, and altogether in its three years of original production, Furby sold over 40 million units, and its speaking capabilities were translated into 24 languages. A video game of the Furbies was released in 1998 by Hasbro Interactive with many activities. Furbies were the first successful attempt to produce and sell a programmed robot. In 2005, new Furbies were released, with voice-recognition and more complex facial movements, among many other changes and improvements. There was a common mistake that they repeated words that were said around them. This belief most likely came from the fact that it is possible to have the Furby say certain pre-programmed words or phrases more often by petting it whenever it said these words. As a result of this myth, several intelligence agencies banned them from their offices.

Birth of the Furby 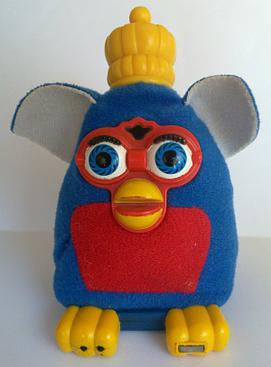 David Hampton and Caleb Chung created the Furby in about nine months (in addition to an additional nine months spent designing the toy). That was the amount of time between Tiger Electronics showing an interest in his interactive creatures, during which Roger Schiffman bought the rights to it, and the time they hit store shelves. Furby's first public appearance was at the International Toy Fair in 1998. Furbys originally retailed for about US$35, and upon release Furbys flew off the shelves in toyshops. The demand for these toys during the 1998 holiday season drove the resale price over US$100 and sometimes as high as several hundred dollars. Furbies sold for over US$300 in newspapers and in auctions. Nicknames were given to them, and sellers gave values to them. Some people continue to call their Furbies by the terms 'wedding Furby', 'tuxedo Furby', 'snowball Furby', 'biker Furby', and others. All, of course, were named rare by sellers, because they were so hard to find at the time. In a sure display of the demand for even one Furby, some sellers at the time scammed people out of a lot of money, without even having first given them a Furby. Parent battles, arguments, and fights grew higher at the popularity of them, and when retail supplies ran out, parents turned to the Internet, where Furbies could be purchased for two, three, or more multiples of their retail price. This action led to many parents ending up on eBay.

In 2005 Furbies were re-introduced with the release of the new Emoto-Tronic Furby. The highly growing emotional realism of the Emoto-Tronic Furby has given birth to a number of Furby-like special interest groups. These communities want to bring features of the Furby experience into human society. The most visible of these groups include Furbish-to-English translators and Furby adoption agencies.

The original Furbies were 6 inches (15 cm) tall. The main reason for their popularity was because of their apparent "intelligence", reflected in their ability to develop language skills. Furbies can communicate with one another via an infrared port located between their eyes. A simple electric motor and a system of cameras and gears close the Furby's eyes and mouth, raise its ears, and lift it off the ground in a faux display of mobility. The originals are still popular with many hackers as they can be dissected and made or changed to do other interesting things, including being able to say something insulting or humorous, like Shut up. In particular, they can made be to do things with their advanced audio capabilities and various sensory interfaces.

In 1999, the Furby Babies line was introduced. Furby Babies are smaller than the original, have higher voices, and cannot dance, but switch to speaking English more quickly. They also have bigger vocabulary, and different "Easter Eggs" and "games" built into them. Baby furbies come in 24 different colors. All with white eye lashes, six different eyecolors.

Book Furbies were also released, including an interactive Furby-like Gizmo, from the movie Gremlins, a Furby-like Interactive Yoda based on the Star Wars character, and a Furby-like Interactive E.T. from the movie of the same name. Another 'friend of furby', called Shelby, is similar to Furby, but looks like a clam, has lots of improvement in memory, and has a different personality; it was released in 2001 and can communicate with the original Furbies and Furby Babies. They also have sensors that can sense loud sounds, they can sense being upside down (they say things like "Shiver me timbers" and "Walk the plank", in the style of a pirate ship captain, when you leave them upside-down for a long period of time), and they laugh when you "tickle" them (their antennae - or "tennies", as they like to call them). They also purr when you "pet" them. You can feed them by sticking your finger in their mouth. Similarly, Shelbys do not have their own names, unlike the classic Furbies. Shelbys are also capable of knowing if it is talking to a Furby or another Shelby, saying phrases such as "Where's Furby?" - though they cannot tell the difference between a Furby and a Furby Baby - they just think it's a Furby. In addition to English, Shelbys also know some Furbish words and also have their own language called "Shelbish."

The latest kinds of Furby were released in August 2005. Larger than the other ones, the new Furbies have been upgraded with a more emotional face and a voice recognition system, letting them communicate with humans. Unlike the Furbies originally released, just one order is necessary to make them 'sleep', and they have an off switch. They can communicate with other types of Emoto-tronic Furbies, though to a smaller amont than the communication between original Furbies, and they cannot themselves communicate with the original Furbies. They also do not have light sensors and basic motion sensors. These Furbies, according to the story they come packed with, are from Furby Island.

In 2006, a new version of Furby baby was released, with most notable features being the new look and a more "Baby-ish" appearance in contrast to the Emoto-Tronic Furby adult. They also have considerably less features than the "adult" Furby, with a very limited vocabulary and a lower level of interactivity. Another notable feature of the 2006 Emoto-Tronic Baby Furby is the movable "legs", which unfurl when Furby baby is awakened.

Furbish is the language which is spoken by the Furbies. It is similar to English with a different grammar structure. A newly bought Furby starts out speaking entirely Furbish, the unique language with short words, simple syllables, and various other sounds, that all Furbies use, but are programmed to speak less Furbish as they learn more English as they "grow". Throughout a Furby's lifetime, it gradually learns English words and phrases, which it begins to speak in place of Furbish. The more English they learn, the more they "grow", making them more muture. The Furbish phrase "WHOA! Me deep sleep!" would translate into English as "Whoa! I slept for a long time!"

These are common Furbish pharses.

Furbies may say these Furbish words:

All content from Kiddle encyclopedia articles (including the article images and facts) can be freely used under Attribution-ShareAlike license, unless stated otherwise. Cite this article:
Furby Facts for Kids. Kiddle Encyclopedia.