Jem, also known as Jem and the Holograms, is an American animated musical television series that ran from 1985 to 1988. The series is about record company owner Jerrica Benton, her singer alter-ego Jem, and the adventures of Jem and her band the Holograms.

The series was a joint collaboration by Hasbro, Sunbow Productions and Marvel Productions, the same team responsible for G.I. Joe and Transformers. The creator of the series, Christy Marx, had also been a staff writer for the aforementioned programs. The animation for most of the episodes was provided by Japanese animation studio Toei Animation with some provided by South Korean studio AKOM. 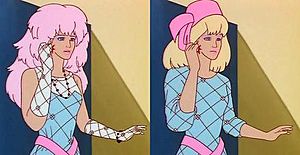 The series revolves around Jerrica Benton, the owner and manager of Starlight Music, and her alter-ego Jem, lead singer of the rock group the Holograms. Jerrica adopts the persona of Jem with the help of a holographic computer, known as Synergy, which was built by Jerrica's father to be "the ultimate audio-visual entertainment synthesizer" and is bequeathed to her after his death. Jerrica is able to command Synergy to project the hologram of Jem over herself by means of the remote micro-projectors in her earrings, thus disguising her features and clothing, enabling her to assume the Jem persona. Jem, through the use of her earrings, is also able to project holograms around her and uses this ability throughout the series to avoid danger and provide special effects for the performances of her group.

Jem's group, the Holograms, consists of Kimber Benton, Jerrica's younger sister, keyboardist, and main songwriter for the band; Aja Leith, Asian-American guitarist; and Shana Elmsford, Jerrica's African-American foster sister who plays the synth drums. Aja and Shana are also childhood friends, and adopted foster sisters of Jerrica and Kimber, having lived with the Benton family since they were young. Shana briefly leaves the group to pursue a career in fashion, at which point a new Latina character, Carmen "Raya" Alonso, is introduced as her replacement. The Holograms are aware of Jem's secret identity and the existence of Synergy when the series begins, while Raya is made aware unintentionally shortly before joining the group. Upon her return to the Holograms, Shana becomes the band's bassist.

The Stingers debut in the third season when they cause disruptions for both groups by becoming co-owners of Stinger Sound with Eric Raymond. Originally from Germany, the Stingers are composed of egotistical lead singer Riot (Rory Llewelyn) guitarist/con artist Rapture (Phoebe Ashe) and keyboardist Minx (Ingrid Kruger) the real names of Minx and Rapture are not disclosed in any of the installments.

Episodes of the series frequently revolve around Jerrica's efforts to keep her two identities separate, protect Synergy from those who might exploit the holographic technology, and support the twelve foster children known as the Starlight Girls who live with her and the Holograms. The Misfits frequently attempt to upstage Jem and the Holograms' endeavors, often nearly resulting in physical harm to members of the group. This rivalry is encouraged and manipulated by their manager and central villain in the series, Eric Raymond, the former half-owner of Starlight Music who runs Misfits Music (later Stinger Sound).

During the series, Eric Raymond constantly plots to become owner of Starlight Music and get revenge on Jem and the Holograms for having cost him control of the company. Jerrica also deals with a complex and emotionally draining faux-love triangle involving her alter identity, Jem, and Rio Pacheco, Jerrica's longtime boyfriend. Rio romantically pursues both women, not knowing they are one and the same. Later in the series, Jem is also romantically sought after by Riot, who becomes infatuated with her - adding further complications to her relationships.

In the final episode of the series, the Misfits and Jem declare a truce when Ba Nee, one of the most troubled foster girls in Starlight House, is claimed by her long-lost father. Her father is found by Jem and the Holograms with the help of Riot's father. Riot's relationship with his father is mended with the help of Jem.

Current status of the franchise

Christy Marx has long expressed a desire to make a modern-day revival of the animated series, but stated in a 2004 interview that there are a great deal of complications concerning the rights to the Jem properties.

I would like to see that happen. I don't want to go into a lot of detail, but the whole rights situation for Jem is very, very complicated. Believe me, if there were a simple straightforward way to do it, it would be done. But there are some very big complications that are in the way at the moment.

After almost 20 years, since last airing in the United States in 1993 on the USA Network (in re-runs), Jem returned to syndication. The series aired reruns on The Hub Network/Discovery Family from May 31, 2011, to November 15, 2015.

On July 25, 2011, Teletoon Retro, a Canadian channel dedicated to cartoons, announced that Jem would be part of its fall 2011 lineup. On April 5, 2012, Hasbro announced that Jem, along with several other Hasbro franchises, will be available on Netflix.

On September 8, 2011, Hasbro issued a press release announcing its attendance at the 2011 New York Comic Con convention, which ran from October 13 to October 16. The press release stated that Hasbro would be showing new and upcoming products from its toy lines at its booth, including Jem and the Holograms.

On June 27, 2012, Integrity Toys, Inc. announced their plans to release a brand-new series of collectible fashion dolls based on the TV series. The special edition Hollywood Jem doll became available at the Hasbro Toy Shop booth during Comic-Con International in San Diego at an approximate retail price of $135. The Jem doll sold out on day two of the convention.

On October 5, 2012, the four (then-upcoming) dolls in the new Integrity Toys limited edition collectible line were presented with pictures: Classic Jem, Jerrica Benton, Synergy and Rio Pacheco. The suggested retail price is US$119 and they began shipping in late November 2012; pre-orders were accepted via Integrity Toys' network of authorized dealers. As of October 2016, Integrity Toys has produced over forty different dolls based on the classic show.

In 2011, Hasbro released a one-off comic book titled Unit:E as an exclusive at the New York Comic-Con; this was created by "HasLab" as a potential multi-brand crossover platform. The plot depicted Synergy, now an alien artificial intelligence, assisting the descendant of Acroyear and a Biotron from Micronauts in searching for heroes to help him combat Baron Karza; she shows them characters from G.I. Joe, Transformers, Battleship Galaxies, Stretch Armstrong, Action Man, M.A.S.K. and Candy Land, amongst others; Jerrica herself is shown as not having taken up the Jem identity yet, but will eventually compose the "Music of the Spheres" (presumably with Synergy's aid). The comic, however, was never followed-up.

The Jem comic book was released by IDW in March 2015: written by Kelly Thompson, art by Sophie Campbell and colors by M. Victoria Robado. The comic book offers a modern re-imagining of the series with new character designs and different situations, such as the Holograms and the Misfits being unsigned bands at the start with Eric Raymond being hired as the Misfits' manager during the second story arc. In addition, Kimber and Stormer begin a romantic relationship. As of Issue #16, which is Campbell's final issue as regular artist, The Stingers have been introduced to the series, with Raya being featured as a fourth member of the band. The title's current status within the new Hasbro Comic Book Universe (consisting of several new or relaunched titles, using the IDW Transformers comics as the backbone for a cohesive universe) has been somewhat erratic; IDW writers have generally indicated that, while characters from Jem will not show up in crossovers (including the Revolution mini-series that launched the universe), they do exist and will receive occasional references. The series ended on June 14, 2017, with issue #26, but a six-issue miniseries--Jem & the Holograms: Infinite #1 and Jem & the Holograms: Misfits Infinite #1 was released later in the month.

A one-shot Jem and the Holograms: IDW 20/20 was published in January 2019 as part of IDW 20/20 which celebrated the 20th anniversary of IDW Publishing. The comic takes place 20 years after the final issue of the ongoing comic.

After the success of G.I. Joe and Transformers films, Hasbro began considering a live-action film adaptation or a new incarnation of the animated series with Universal Pictures, with which Hasbro had signed a six-film contract in 2010.

On March 20, 2014, a live-action motion picture adaptation of Jem and the Holograms was announced, to be directed by Jon M. Chu. Filming on the production began in April 2014. On April 24, it was announced that Aubrey Peeples had been cast as Jem, with Stefanie Scott as Kimber, Hayley Kiyoko as Aja and Aurora Perrineau as Shana. On April 30, 2014, actor Ryan Guzman was cast as Rio. On May 20, Juliette Lewis and Molly Ringwald joined the film. The film was theatrically released on October 23, 2015; it received generally negative reviews from critics and fans, with criticism targeted at the angsty teen drama, strayed too far from the source material as well as original series fan content being manipulated into reaction to the in-film characters. It was a box office bomb, grossing less than half its $5 million budget, and was removed from theaters by Universal after two weeks.

Hasbro Studios with Legacy Recordings released its first non-soundtrack album, Truly Outrageous: A Tribute to Starlight Records on August 7, 2015. The record was part of the promotion of the Jem film. The album consisted of remakes of classic Jem TV series songs. This release was digital only.

All content from Kiddle encyclopedia articles (including the article images and facts) can be freely used under Attribution-ShareAlike license, unless stated otherwise. Cite this article:
Jem (TV series) Facts for Kids. Kiddle Encyclopedia.