Bop It facts for kids 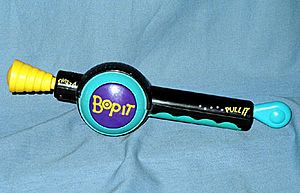 Bop It is a series of battery-powered games made by Hasbro. The aim of the game is to respond quickly to the directions that come out of the game's speakers. These directions are given in a way that requires the player do use different devices on the machine, such as pull handles, twist cranks, spin wheels, or toggle switches. A beat is played during the game and the beat will get faster as the player scores more points, making it harder for the player to respond.

Bop It can be played by one to four people at a time and has been very popular as a children's game. It was designed by Dan Klistner and developed by other Hasbro designers, including Bob Welch. The original version was released in 1996, and there have been several versions made since then. The current classic version was released in 2016 to mark the 20th anniversary of the original game. It was demonstrated at the New York Toy Fair in 2016 before the game was released in June 2016. It is called Bop It! New Moves.

Since 2008, the voice in the games has been Buddy Rubino. He has recorded the voice for Bop It!, Bop It! XT, Bop It! Smash!, Bop It! Tetris and Bop It! New Moves.

Re-Release Series (Featuring Buddy Rubino as the Main Voice for Bop It, Twist It Pull It Games) (2008+)

All content from Kiddle encyclopedia articles (including the article images and facts) can be freely used under Attribution-ShareAlike license, unless stated otherwise. Cite this article:
Bop It Facts for Kids. Kiddle Encyclopedia.