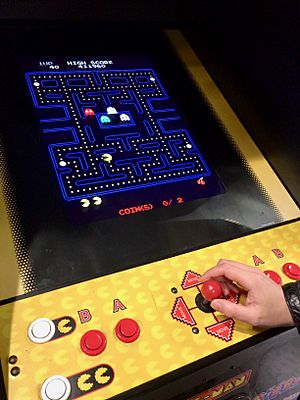 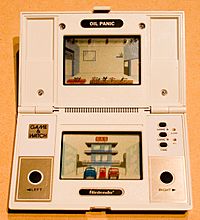 The earliest form of dedicated console, handheld electronic games are characterized by their size and portability. Used to play interactive games, handheld electronic games are often miniaturized versions of video games. The controls, display and speakers are all part of a single unit, and rather than a general-purpose screen made up of a grid of small pixels, they usually have custom displays designed to play one game. This simplicity means they can be made as small as a digital watch, which they sometimes are. The visual output of these games can range from a few small light bulbs or LED lights to calculator-like alphanumerical screens; later these were mostly displaced by liquid crystal and Vacuum fluorescent display screens with detailed images and in the case of VFD games, color. Handhelds were at their most popular from the late 1970s into the early 1990s. They are both the precursors to and inexpensive alternatives to the handheld game console. 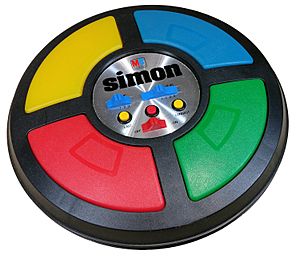 Examples of handheld electronic games include: 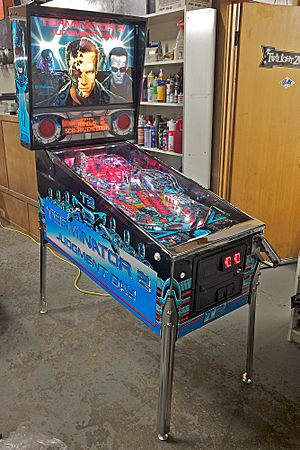 Since the introduction of electromechanics to the pinball machine in 1933's Contact, pinball has become increasingly dependent on electronics as a means to keep score on the backglass and to provide quick impulses on the playfield (as with bumpers and flippers) for exciting gameplay. Unlike games with electronic visual displays, pinball has retained a physical display that is viewed on a table through glass. Similar forms of game such as pachinko have also become increasingly dependent on electronics in modern times.

Examples of pinball games include:

Redemption games such as Skee Ball have been around since the days of the carnival game - well earlier than the development of the electronic game, however with modern advances many of these games have been re-worked to employ electronic scoring and other game mechanics. The use of electronic scoring mechanisms has allowed carnival or arcade attendants to take a more passive role, simply exchanging prizes for electronically dispensed coupons and occasionally emptying out the coin boxes or banknote acceptors of the more popular games. 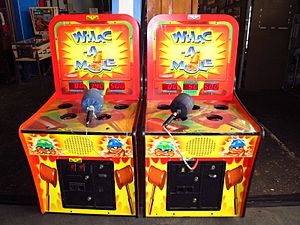 Merchandisers such as the Claw Crane are more recent electronic games in which the player must accomplish a seemingly simple task (e.g. remotely controlling a mechanical arm) with sufficient ability to earn a reward.

Examples of redemption games include:

Examples or merchandisers include: 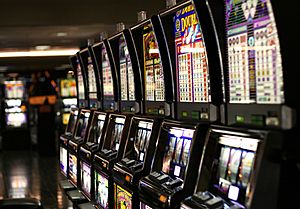 The slot machine is a casino gambling machine with three or more reels which spin when a button is pushed. Though slot machines were originally operated mechanically by a lever on the side of the machine (the one arm) instead of an electronic button on the front panel as used on today's models, many modern machines still have a "legacy lever" in addition to the button on the front. Slot machines include a currency detector that validates the coin or money inserted to play. The machine pays off based on patterns of symbols visible on the front of the machine when it stops. Modern computer technology has resulted in many variations on the slot machine concept. 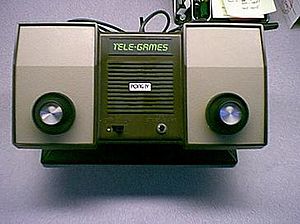 Tele-Games Pong IV, Sears' version of Pong sequel (Pong Doubles), was one of the many consoles that flooded the market by 1977. 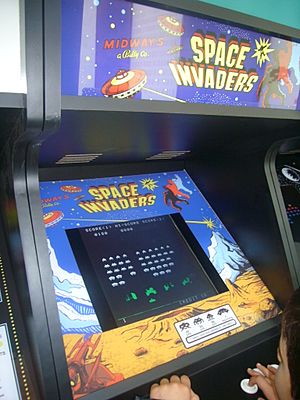 Examples of arcade games include: 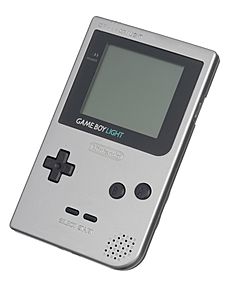 A console game is a form of interactive multimedia used for entertainment. The game consists of manipulable images (and usually sounds) generated by a video game console, and displayed on a television or similar audio-video system. The game itself is usually controlled and manipulated using a handheld device connected to the console called a controller. The controller generally contains a number of buttons and directional controls (such as analog joysticks) each of which has been assigned a purpose for interacting with and controlling the images on the screen. The display, speakers, console, and controls of a console can also be incorporated into one small object known as a handheld game console.

Console games are most frequently differentiated between by their compatibility with consoles belonging in the following categories:

Within these categories the systems are differentiated between by their manufacturer and generation (corresponding to the year of their release). Console games are also often differentiated by game genre.

These were types of arcade games similar to arcade video games but relying on electro-mechanical components to produce sounds or images rather than a cathode ray tube screen. These were popular during the 1960s and 1970s, but video games eventually overtook them in popularity during the golden age of video arcade games that began in 1978.

A popular early example was Sega's Periscope in 1966. It was an early submarine simulator and light gun shooter, which used lights and plastic waves to simulate sinking ships from a submarine. Sega later produced gun games which resemble first-person shooter video games, but were in fact electro-mechanical games that used rear image projection in a manner similar to the ancient zoetrope to produce moving animations on a screen. An early example of this was the light gun game Duck Hunt, which Sega released in 1969; it featured animated moving targets on a screen, printed out the player's score on a ticket, and had sound effects that were volume controllable.

With the development of technology geared toward electronic entertainment of animals (typically pets), video games for pets have also been created. Since the majority of animals lack opposable thumbs, the fine motor skills required for use in most gaming is unavailable to these animals. Furthermore, the visual perception of many animals is influenced by a different visible spectrum than humans. Techniques that de-emphasize manual control and visual components have been developed to circumvent these problems beginning with the development of television for pets. From this point, developers have branched out into the realm of electronic games with such products as Mice Arena (for mice), Chicken Petman, and Cyberpounce (for cats).

All content from Kiddle encyclopedia articles (including the article images and facts) can be freely used under Attribution-ShareAlike license, unless stated otherwise. Cite this article:
Electronic game Facts for Kids. Kiddle Encyclopedia.