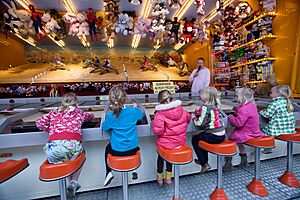 A carnival game is a game of chance or skill that can be seen at a traveling carnival, charity fund raiser, amusement arcade and amusement park, or on a state and county fair midway. They are also commonly played on holidays such as Mardi Gras, Saint Patrick's Day, and Oktoberfest.

Carnival games are usually operated on a "pay per play" basis. Prices may range from a small amount, for example 25 cents, to a few dollars per play. Most games offer a small prize to the winner. Prizes may include items like stuffed animals, toys, or posters. Continued play is encouraged as multiple small prizes may be traded in for a larger prize. Multiplayer games—the "Watergun" game is one example—may change the size of the prize with the number of players. In a more difficult game, including the "Baseball and Basket" or "Stand the Bottle", a large prize may be awarded to any winner.

Carnival games have a poor reputation in some areas. This may be that some carnival games utilize optical illusions or physical relationships that make it hard for a player to judge the game's difficulty. Also, some operators have run games that are rigged to take advantage of unsuspecting players. In many areas, these games are tested by local law enforcement to find unfairly run games.

Games of chance are favorite carnival games. A random outcome gives all players the chance of winning a prize. An example of a carnival game of chance is the "Dime Pitch" game. The objective is to toss a coin (typically a dime or quarter) onto a horizontal board that has random marks on it. The marks on the board are the same diameter as the coin thrown. By completely covering the mark on the board with the coin, the player wins. Another example of a game of chance is the "Birthday" game. Players place their bets on a rail mounted strip that has months, colors and holidays written on it. Many players choose the month of their birth for their bet. A random player is then selected to throw a large multisided die into a designated center area (play area) of the booth. The die thrown has corresponding months, colors and holidays written on the different sides. The month, color or holiday that shows on the top of the thrown die, when it stops, will indicate the winner.

In the "Pingpong Ball and Fish Bowl", players throw pingpong balls at a table filled with rows of empty small fish bowls. If the player gets a ball in the bowl, they usually win a goldfish. A game like the "Duck Pond", which is geared for young children, may offer a winner every time. The player selects a rubber duck that is floating at random in water. Writing on the bottom of the duck reveals the prize won. 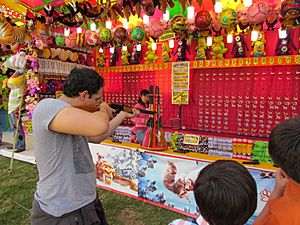 Games of skill are another favorite carnival game. These games may test a players aim at hitting a target with either a ball or a weapon. Some games of this type are the "Cross Bow Shoot", the "Milk Bottle" game, or the "Balloon and Dart" game.

Other skill testing games challenge the physical abilities of the player. One example of this type of game is the "Rope Ladder Climb". In this game, the player must keep their balance while climbing an angled rope ladder that can pivot and invert the player. The object of the game is to climb the ladder, without falling off, and ring a bell at the end of the climb. Another game that tests the physical abilities of the player is "Ring the Bell". The player uses a large mallet to strike a pivot board on the game, this causes an indicator to be driven vertically up an indicator scale board. By hitting the pivot hard enough, the indicator will ring a bell mounted at the top of the indicator scale board indicating a win. Cover the spot is a game that involves covering a giant red spot with five smaller discs dropped by hand; all red (or color) must be covered to win.

The Ball and Basket or Bucket Game

Carnival games are often viewed or portrayed as dishonest, due to past history that may not necessarily apply to modern-day games and operators. The term "mark" (meaning sucker) originated with the carnival.

Rigging a carnival game may be done in many different manners depending on the game. For example, the "Ball and Basket" game may be rigged by moving the "A" frame onto which the basket is mounted. This would change the trajectory of the ball. Another method has the operator leaving a ball in the basket for the demonstration which absorbs the energy of the tossed ball, enabling the ball to stay in the basket, and then remove it when the mark plays, which makes the ball much more susceptible to bouncing out. In a game like "Ring Toss", the blocks that the prizes are attached to are cut in such a way as to ensure the ring will not fit. The "Balloon and Dart" game can be rigged by underinflating the balloons or by using dull point darts. Some games may be rigged to play honestly or dishonestly and can be switched by the game operator. The "Milk Bottle" game can be rigged this way. On a rigged game, one of the milk bottles is heavier than the others. Depending on how the bottles are stacked will determine if the player will win.

Some games are simply impossible to win. One such game is the "Push 'em Up" (or "Stand the Bottle") game, which requires the player to stand up a bottle with a 2-tine plastic fork, was featured in episode 5 of Penn & Teller Tell a Lie. The bottles used in the game are weighted on one side, which makes it impossible to stand the bottles upright without tipping them over when the heavier side is rotated to the top. The "Bottle Up," often confused with this game, is simply a skill game where the player uses a fishing pole with a ring attached to the end of the string to stand up the bottle.

By rigging the game, the game operators can vastly increase the money they take in.

All content from Kiddle encyclopedia articles (including the article images and facts) can be freely used under Attribution-ShareAlike license, unless stated otherwise. Cite this article:
Carnival game Facts for Kids. Kiddle Encyclopedia.