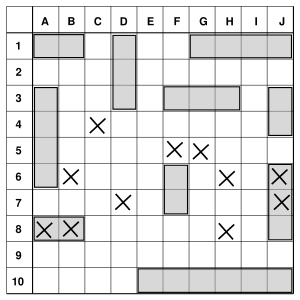 A map of one player's ships and the hits against them, from a game in progress. The grey boxes are the ships placed by the player, and the cross marks show the squares that their opponent has fired upon. The player would be tracking the success of their own shots in a separate grid.

Battleship (also Battleships or Sea Battle) is a strategy type guessing game for two players. It is played on ruled grids (paper or board) on which each player's fleet of ships (including battleships) are marked. The locations of the fleets are concealed from the other player. Players alternate turns calling "shots" at the other player's ships, and the objective of the game is to destroy the opposing player's fleet.

Battleship is known worldwide as a pencil and paper game which dates from World War I. It was published by various companies as a pad-and-pencil game in the 1930s, and was released as a plastic board game by Milton Bradley in 1967. The game has spawned electronic versions, video games, smart device apps and a film. 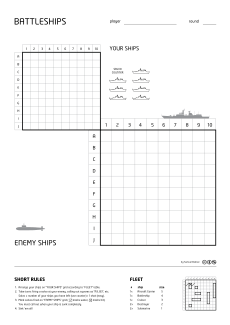 A typical pen-and-paper version of the game, showing the large "primary" grid and the smaller "tracking" grid

The game is played on four grids, two for each player. The grids are typically square – usually 10×10 – and the individual squares in the grid are identified by letter and number. On one grid the player arranges ships and records the shots by the opponent. On the other grid the player records their own shots.

Before play begins, each player secretly arranges their ships on their primary grid. Each ship occupies a number of consecutive squares on the grid, arranged either horizontally or vertically. The number of squares for each ship is determined by the type of the ship. The ships cannot overlap (i.e., only one ship can occupy any given square in the grid). The types and numbers of ships allowed are the same for each player. These may vary depending on the rules.

The 1990 Milton Bradley version of the rules specify the following ships:

In 2002, Hasbro renamed the Cruiser as Destroyer, taking three squares, and substituted a new two-square ship called the Patrol Boat.

After the ships have been positioned, the game proceeds in a series of rounds. In each round, each player takes a turn to announce a target square in the opponent's grid which is to be shot at. The opponent announces whether or not the square is occupied by a ship. If it is a "hit", the player who is hit marks this on their own or "ocean" grid (with a red peg in the pegboard version). The attacking player marks the hit or miss on their own "tracking" or "target" grid with a pencil marking in the paper version of the game, or the appropriate color peg in the pegboard version (red for "hit", white for "miss"), in order to build up a picture of the opponent's fleet.

When all of the squares of a ship have been hit, the ship's owner announces the sinking of the Carrier, Submarine, Cruiser/Destroyer/Patrol Boat, or the titular Battleship. If all of a player's ships have been sunk, the game is over and their opponent wins. If all ships of both players are sunk by the end of the round, the game is a draw.

In the 1931 Salvo edition of the game, players target a specified number of squares at one time, and all of the squares are attacked simultaneously. A player may initially target five (one for each battleship) squares per turn, and the amount of shots decreases when one of the player's ships are lost. In other variants of this mechanic, the number of shots allowed to fire each turn may either be fixed at five for the whole game, be equal to the number of unsunk ships belonging to the player, or be equal to the size of the player's largest undamaged ship. The opponent may either call the result of each shot in turn, or simply announce the hits or misses. E.g: "two hits and three misses", leaving their opponent to work out the consequences of the salvo. In the modern Milton Bradley rules for Battleship, Salvo is listed as a variation "for more experienced players", with the number of shots being equal to the number of ships that the firing player has remaining.

One variant of Battleship allows players to decline to announce that a ship has been sunk, requiring their opponent to take further shots in order to confirm that an area is clear. Another variant of the rule allows a player to move one of their ships to a new, uncalled location every fourth or fifth move.

Another variant allows multiple players and allow different shapes for the ships as long as each square of a ship touches at least one other square of that ship.

A variant popular in the United Kingdom is for each player to also have 5 mines. These occupy 1 square each and are placed on the board in the same manner as the ships. When a player's guess hits a mine on an opponent's board it destroys anything in that square and the 8 immediately surrounding squares on the board of the player making the guess.

All content from Kiddle encyclopedia articles (including the article images and facts) can be freely used under Attribution-ShareAlike license, unless stated otherwise. Cite this article:
Battleship (game) Facts for Kids. Kiddle Encyclopedia.