Kids Encyclopedia Facts
Not to be confused with Bull Terrier or American Staffordshire Terrier.

The Staffordshire Bull Terrier is a British breed of short-haired terrier of medium size. It originated in the city of Birmingham and in the Black Country of Staffordshire from cross-breeding between the Bulldog and the English white terrier. It was bred as a fighting dog and, until blood sports were banned in 1835, was used for badger baiting, ratting, bull-baiting and dog fighting.

The Stafford is a descendant of the now extinct bull and terrier cross, an ancestry developed in England in the early 19th century. The Bull Terrier, founded by James Hinks of Birmingham, England, the Stafford, the American Staffordshire Terrier and American Pit Bull Terrier all trace back to the bull-type terrier breeds with the common component being the Bulldog.

After the banning of blood sports and pit fighting in 1835, attitudes changed which, over the course of centuries, resulted in generations of responsible breeding and further breed refinement of the Stafford as a popular family pet and companion dog. The Stafford's association in early 19th century as a fighting dog made it difficult to gain recognition by the Kennel Club in the United Kingdom but was eventually added to their purebred registry in 1935. Staffords first arrived in North America in the mid to late 1880s but it was not until 1974 that the American Kennel Club accepted the Staffordshire Bull Terrier into their purebred registry.

The Stafford is a stocky, muscular and unusually strong small to medium-sized dog that stands 14 to 16 in (36 to 41 cm) at the shoulder. The dogs weigh 29 to 37 lb (13 to 17 kg) and the bitches 24 to 34 lb (11 to 15 kg). It has a broad chest, strong shoulders, well-boned wide-set legs, a medium length tail that is carried low and a broad head with a short muzzle; its ears fold over at the tips and are not cropped. The Stafford's coat is short, stiff and close. Base colours can be red, fawn, white, black or blue, or any one of the aforementioned with white, any shade of brindle or any shade of brindle with white.

Even in the days of blood sport, the Stafford was always a popular family pet and companion dog, and is even more so today. They are considered loyal, courageous and affectionate, and are among the dog breeds recommended by the KC as suitable for families. They have a reputation for pugnaciousness, and when challenged by another dog it is characteristic of them to not back away. It is recommended that puppies receive early socialisation; certainly before 18 months. Staffords are healthy and robust dogs with a life expectancy of 12–14 years. 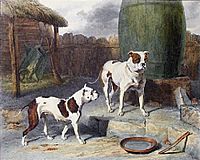 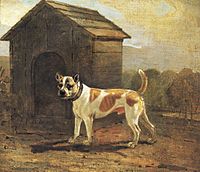 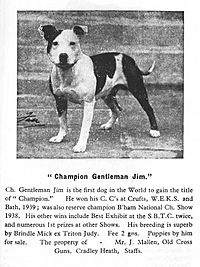 In the early 1800s, “bull and terrier” crossbreeds had been developed to satisfy the need for vermin control and the taste for blood sports. In the mid–19th century, James Hinks wanted to develop a socially acceptable "gentleman's companion" with refinement, cleaner lines, and courage without the aggressive tendencies. Two different types of bull and terriers resulted, including Hink's cross of the bull and terrier with the English White Terrier to achieve a more refined appearance with better legs and a nicer head. A later outcross included the Dalmatian and Collie which led to the development of an athletic white dog known as Hink's "white cavalier", the forerunner to the modern Bull Terrier. Devotees preferred the original bull and terrier type over Hink's Bull Terrier, and remained loyal to their preferred type, which became the modern Staffordshire Bull Terrier of the same ancestry as the Bull Terrier.

The Stafford was developed in what was then considered the "black country" of Staffordshire and northern parts of Birmingham. There are two theories about the development of the Stafford as recognised by the KC registry.

The first and more widely held theory is that the Stafford, like the Bull Terrier, descends from the long-extinct bull and terrier, which originated as a cross between the ferocious, thickly muscled Old English Bulldog and the agile, lithe and feisty Black and Tan Terrier. The aggressive Old English Bulldog, bred for bear and bull baiting, was often pitted against its own kind in organised dog fights, but it was determined that lighter, faster dogs were better suited for dogfighting than the heavier Bulldog. In an effort to produce a lighter, faster, more agile dog with the courage and tenacity of the Bulldog, breeders outcrossed with local terriers and ultimately achieved success.

The second less widely held theory is that the Old English Bulldog was not crossed with terriers; rather, the Stafford as a breed began with direct descendants derived from generations of selective breeding of early Bulldogs which produced a smaller dog with a more athletic build. Some believe the theory is evidentially supported by certain genetic characteristics and similarities in the appearances of modern Staffords when compared to the Old English Bulldogs depicted in some of the early 19th-century paintings.

In addition to recognition by the KC in 1935, the Stafford was later recognised in the breed registries of various other kennel clubs, such as the AKC, which is the largest purebred breed registry in the world, the Australian National Kennel Council (ANKC), Canadian Kennel Club (CKC), Irish Kennel Club (IKC), New Zealand Kennel Club (NZKC), and the United Kennel Club (UKC) in the United States (US). 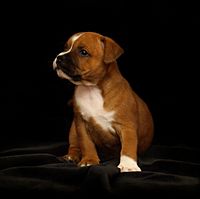 Staffords are popular for the most part because of their stout agility and muscular bodies which makes them appear tough while at the same time they are loving, courageous and loyal family dogs that are people-friendly. A survey conducted by Eukanuba revealed that Staffords and West Highland White Terriers are the "most communicative and affectionate breeds" with the Stafford being the "‘waggiest’ (80%) and most partial to a belly rub (62%)". In 2019, ITV’s Britain's favourite dogs declared the Staffordshire Bull Terrier as the most popular dog breed in Britain. They rank among the most popular dog breeds in the UK, Australia, France and New Zealand.

Due in part to its popularity, Staffords have experienced some negative impacts from over-breeding. In 2013, the breed accounted for more than a third of the dogs passing through shelters such as Battersea Dogs & Cats Home. The breed has been associated with chav culture, which tends to attract the negativity associated with it.

All content from Kiddle encyclopedia articles (including the article images and facts) can be freely used under Attribution-ShareAlike license, unless stated otherwise. Cite this article:
Staffordshire Bull Terrier Facts for Kids. Kiddle Encyclopedia.