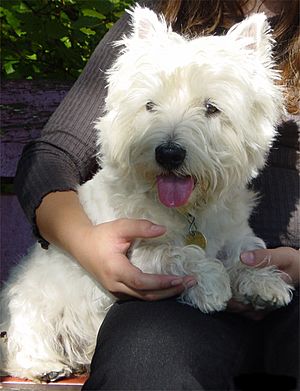 The West Highland White Terrier or Westie is originally a Scottish dog.

The Westie was first used for hunting foxes and otters. The breed is well known for high stamina, courage and agility. Westies have a double white coat which protects them from attacks and cold weather. They have dark black eyes.

They are small dogs and are lively, playful and alert. They are loyal to their owner, but can be stubborn at times. They are known to kill small animals, such as moles, squirrels, chipmunks and birds. They like to be outdoors.

All content from Kiddle encyclopedia articles (including the article images and facts) can be freely used under Attribution-ShareAlike license, unless stated otherwise. Cite this article:
West Highland White Terrier Facts for Kids. Kiddle Encyclopedia.