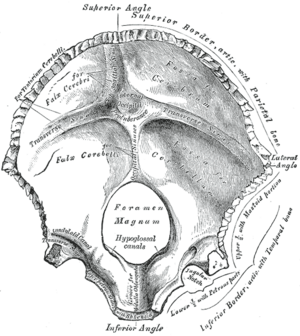 Schematic of the foramen magnum 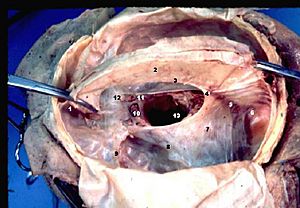 An opened skull. The foramen magnum is the large hole in the center; labelled '13'

The foramen magnum is one of several holes in the base of the skull. Normally the spinal cord is attached to it. The Foramen Magnum is the largest aperture in the primate body. This hole is located in the base of the human skull as part of the occipital bone, back of the monkey skull and in between those locations for apes. It is directly correlated with locomotion ( Humans are bipedal, monkeys quadrupedal and apes are knuckle walkers. )

All content from Kiddle encyclopedia articles (including the article images and facts) can be freely used under Attribution-ShareAlike license, unless stated otherwise. Cite this article:
Foramen magnum Facts for Kids. Kiddle Encyclopedia.