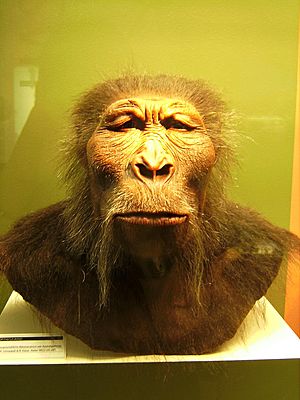 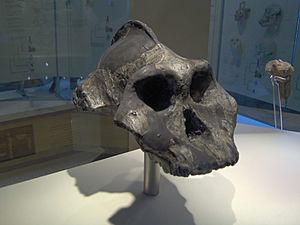 All species of Paranthropus were bipedal, and many lived during a time when species of the genus Homo, such as Homo ergaster and Homo erectus, were living.

Australopithecus and Paranthropus also looked very different from each other. These differences were only found in remains of the skull. The other parts of the skeleton were still very similar, so it is reasonable to think the difference was an adaptation to different food. Paranthropus was more massively built as to skull and teeth. It often had gorilla-like sagittal crests on the cranium which anchored massive temporalis muscles for chewing.

Paranthropus did not behave in the same way as Homo. They lived on a diet of heavy-duty plant material: leaves, slim branches, grass, roots. The diet might be supplemented with insect grubs. Lacking our flexible behaviour, Paranthropus relied on the steady environmental conditions of the tropical forest. Members of the genus Homo, such as Homo habilis, had proportionately larger brains and more flexible behaviour. They were able to eat a much wider variety of foods.

For the most part the Australopithecus species A. afarensis, A. africanus, and A. anamensis either disappeared from the fossil record before the appearance of early humans or seem to have been the ancestors of Homo habilis. P. boisei and P. aethiopicus, on the other hand, continued to evolve along a separate path distinct and unrelated to early humans. Paranthropus shared the earth with some early examples of the Homo genus, such as H. habilis, H. ergaster, and possibly even H. erectus.

Species of Paranthropus had smaller braincases than Homo, yet they had significantly larger braincases than Australopithecus. Paranthropus is associated with stone tools both in southern and eastern Africa, although there is considerable debate whether they were made and utilized by these robust australopithecines. Most believe that early Homo was the tool maker. Most Paranthropus species almost certainly did not have language or to have controlled fire, although they are directly associated with the latter at Swartkrans, South Africa. 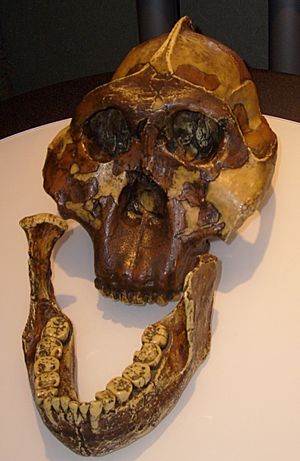 Replica of the skull found by Mary Leakey. Notice the sagittal crest on top of the skull, the robust dentary (lower jaw) with its heavy-duty molar teeth. Like the gorilla, this animal was a herbivore. The shape of the jaw is like a parabola; in gorillas it is more flat at the front. The shape of the jaw and the canines (which do not protrude) are human-like characters.

A partial cranium and mandible of Paranthropus robustus was discovered in 1938 by a schoolboy, 70 km south west of Pretoria in South Africa. It was described as a new genus and species by Robert Broom of the Transvaal Museum. A date of at least 1.95 million years has been obtained for the site.

Paranthropus boisei was discovered by Mary Leakey in July 1959 at the site of Olduvai Gorge in Tanzania. Mary was working alone, as Louis was ill in camp. She rushed back to camp and at the news Louis made a remarkable recovery.

In his notes Louis recorded a first name, Titanohomo mirabilis, reflecting an initial impression of close human affinity. Louis and Mary began to call it "Dear Boy". Recovery was halted on August 7. Dear Boy was in context with Oldowan tools and animal bones.

The fossil was published in Nature on 15 August 1959, but due to a strike of the printers the issue was not released until September. In it Louis placed the fossil in Broom's Australopithecinae family, creating a new genus for it, Zinjanthropus, species boisei. "Zinj" is an ancient Arabic word for the coast of East Africa and "boisei" referred to Charles Boise, an anthropological benefactor of the Leakeys. Louis based his classification on twenty differences from Australopithecus.

Broom had died in 1951 but Dart was still living. He is said to have wept for joy on Louis' behalf on being personally shown Zinj, which Louis and Mary carried around in a tin (later a box). Louis had considered Broom's Paranthropus genus, but rejected it because he believed Zinj was in the Homo ancestral stock but Paranthropus was not. He relied heavily on the larger size of Zinj's canines.

The battle of the name raged on for many years and drove a wedge between Louis and LeGros Clark, who took the Paranthropus view. On the other hand it brought the Leakeys and Dr. Melville Bell Grosvenor of the National Geographic Society together. The Leakeys became international figures and had no trouble finding funds from then on. The Zinj question ultimately became part of the Australopithecus/Paranthropus question (which only applied to the robust Australopithecines).

All content from Kiddle encyclopedia articles (including the article images and facts) can be freely used under Attribution-ShareAlike license, unless stated otherwise. Cite this article:
Paranthropus Facts for Kids. Kiddle Encyclopedia.