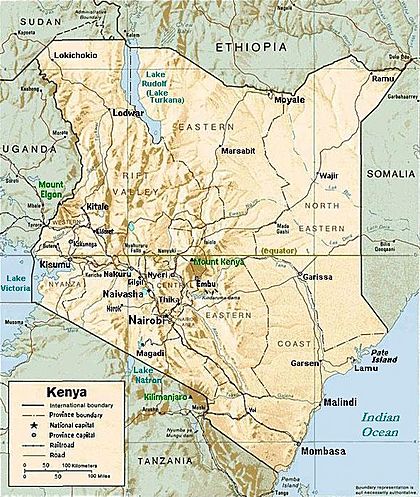 Lake Turkana, formerly known as Lake Rudolf, is a lake in the Great Rift Valley in northwest Kenya. Its far northern end crosses into Ethiopia.

The water is drinkable, but not palatable. It supports a rich lacustrine wildlife. The climate is hot and very dry.

The rocks of the surrounding area are predominantly volcanic. Central Island is an active volcano, emitting vapors. Outcrops and rocky shores are found on the East and South shores of the lake, while dunes, spits and flats are on the West and North, at a lower elevation.

On-shore and off-shore winds can be extremely strong as the lake warms and cools more slowly than the land. Sudden, violent storms are frequent. Three rivers (the Omo, Turkwel and Kerio) flow into the lake, but lacking outflow, its only water loss is by evaporation. Lake volume and dimensions are variable. For example, its level fell by 10 meters (33 ft) between 1975 and 1993.

Due to temperature, aridity and geographic inaccessibility, the lake retains its wild character. Many Nile crocodiles are on the flats. The rocky shores are home to scorpions and carpet vipers. Although the lake and its environs have been popular for expeditions of every sort under the tutelage of guides, rangers and experienced persons, they certainly must be considered hazardous for unguided tourists.

The Lake Turkana area is regarded by many anthropologists as the cradle of humankind because there are many hominid fossils. The skeleton of Turkana boy was found near the lake in 1984.

All content from Kiddle encyclopedia articles (including the article images and facts) can be freely used under Attribution-ShareAlike license, unless stated otherwise. Cite this article:
Lake Turkana Facts for Kids. Kiddle Encyclopedia.