Sophora longicarinata is commonly known as kowhai or limestone kowhai that grows naturally in a limited range around northern Nelson and also western Marlborough in New Zealand. This species has quite small leaves compared to other similar species. Originally classified as a species in 1942 and then merged with Sophora microphylla it was reclassified as its own species again in 2001. As its common name suggests it grows in limestone areas. This species does not have a divaricating juvenile phase. 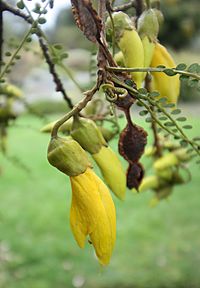 All content from Kiddle encyclopedia articles (including the article images and facts) can be freely used under Attribution-ShareAlike license, unless stated otherwise. Cite this article:
Sophora longicarinata Facts for Kids. Kiddle Encyclopedia.