Hamilton Central is the central business district of Hamilton, New Zealand. It is located on the western banks of the Waikato River. 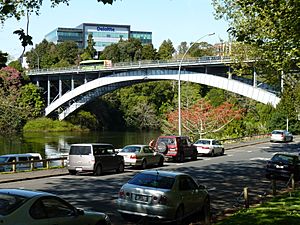 Victoria Bridge across the Waikato River.

Victoria Street, named after Queen Victoria, is the main street of Hamilton running adjacent to the Waikato River. It stretches from Victoria Bridge to beyond the Fairfield Bridge, but the commercial section ends before Whitiora Bridge. 33 of the city's 105 heritage sites are located on the street. Lonely Planet guide states that Hamilton's "main street has sprouted a sophisticated and vibrant stretch of bars and eateries that on the weekend at least leave Auckland's Viaduct Harbour for dead in the boozy fun stakes."

Further along Victoria Street is the pedestrian mall Garden Place. It was carved, after much debate, out of a hill in the late 1930s. The cutting was made through the ridge to allow the formation of Angelsea Street. Later the ridge on the river side of Angelsea Street was bulldozed away, thereby flattening the area for the development of Garden Place and the central CBD around the Hamilton City Council buildings.

The area was initially used as a car park, which was very popular with retailers and shoppers. In 1967, the car park was closed and Garden Place was laid out with grass and trees. A ring road encircled the beautified area, but it was removed in August 1974. The name Garden Place actually refers to the former road, not the grass park area. 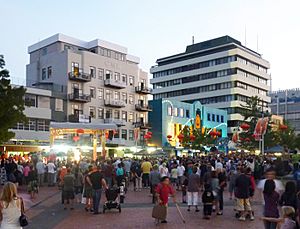 Has a shared drive through, created in 2012, as part of a redesign of the Place.

Hood Street is the main centre of Hamilton's hospitality area, as well as south Victoria Street and Alexandra Street. Many of the city's restaurants and bars are located in the Hood Street vicinity. The street is named after English humourist Thomas Hood.

Located between Barton St and Angelsea St, Casabella Lane is a Spanish themed lane with 21 boutique shops and 9 apartments, built about 2000.

The Waikato Institute of Technology, marketed as Wintec, is one of New Zealand's largest Institutes of Technology/Polytechnics. Its City Centre campus is located between Anglesea Street and Tristram Street near Civic Square and the Hamilton City Council municipal building. 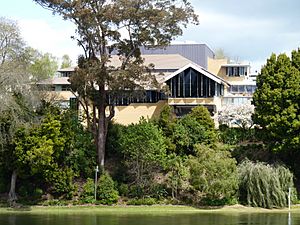 Founders Theatre is Hamilton's largest and best-known theatrical venue with a capacity of 1,249. Opened in 1961, it also performs an important Town Hall function for the city hosting many Civic and Institutional ceremonies.

Located at the corner of Victoria Street and Bridge Street, The Meteor is Hamilton's Black box theatre. The former soft-drink bottling plant and roller-skating rink was converted into a theatre. It also provides facilities on the 1st Floor, suitable for start-up businesses in the creative sector. This Creative Industries Hub known as Soda Inc is an initiative in the cultural development area undertaken by Hamilton City Council in conjunction with Wintec.

Clarence Street Theatre is a 550 capacity theatre with a distinctive De Stijl exterior. The building was originally developed over many years by Hamilton Operatic Society and the original building was known as the Drury Lane Theatre. The current theatre was completed in 1987 by the Society and was acquired by HCC in 1997. In 2015 the theatre was gifted to the Clarence Street Theatre Trust. The venue has hosted countless drama, comedy and smaller concert events. 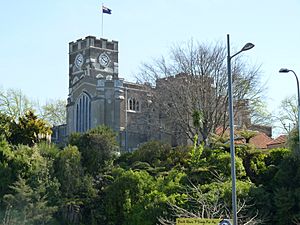 Modelled on a 15th-century Norfolk church, St Peter's Cathedral was constructed with ferro-concrete by Warren and Blechynden of Hamilton. The present St Peter's was completed in 1916 . It is the fourth Anglican church on the site and it serves as the cathedral church for the Bishop and Diocese of Waikato. The church was built on the hill site of the western redoubt built by Australian troops to defend Hamilton from attacks by Kingite Maori during the 1863-4 war. 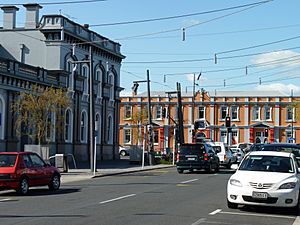 Hamilton’s Post and Telegraph Office was built in 1901. The building was designed by architect John Campbell, in an Edwardian Baroque style. The building was extended by half in 1916 to meet the demand for more facilities, and remained the central post office until 1940 when its replacement opposite Garden Place opened. For the next 40 years, the building was used for Social Welfare purposes. Various other tenants include the Maori Land Court, local Members of Parliament and a Youth Resource Centre. Hamilton City Council purchased the building in 1992 and restored the building as much as possible to original condition. The renovated building was opened as ArtsPost on 27 June 1998.

The Bank of New Zealand left the building in 1986 and it was vacant until it was refurbished in 1994 as The Bank Bar and Brasserie. Its restoration signaled the beginning of a multimillion-dollar redevelopment at the south end of Victoria St. 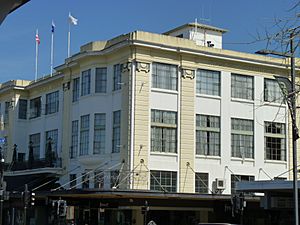 Wesley Chambers was the first multistoreyed building in Hamilton made of reinforced concrete and the first to have a lift. The building was designed in the Chicago School style by Frederick Daniell. Wesley Chambers feature Sullivanesque-style windows with central panes flanked by narrower panes, and the unusual wrought iron balconies on two sides of the building.

For most of its history, Wesley Chambers' upper floors were tenanted by some of the city's most prominent professional people including opticians, solicitors, accountants and dentists. In the 1980s and early 1990s, the building was vacant and but in 1993, it was transformed into a boutique hotel, the Le Grand.

The Hamilton Courthouse, a concrete building on a hill above Anglesea Street, was built in 1931. It had two courtrooms - the Supreme Court and the Magistrates Court. In 1974, arsonists set fire to the building. The Magistrates Court was destroyed and the Supreme Court badly damaged. In 1993, a new court complex was built next to the old building. The old courthouse was unoccupied for a decade but in 2004, a refurbishment project was approved to restore the building as a working courthouse.

The Riff Raff Statue commemorates Rocky Horror Picture Show creator Richard O'Brien, who lived in Hamilton. Weta Workshop was commissioned to create a statue of Riff Raff - one of the show's iconic characters played by O'Brien. The statue was unveiled on Victoria Street on 26 November 2004. The statue has a website and webcam at www.riffraffstatue.org.

Located in Garden Place, Te Tiaho o Matariki was created by Neil Miller. The sculpture represents Pleiades in the form of a growing vine, with the stars of Matariki forming the fruit on the vine. It honours the city’s first inhabitants (Garden Place was first used by Maori as a garden and observatory); and celebrates the horticultural heritage of the name of the city’s civic plaza: Garden Place. The curving vine-like form of the sculpture also references the nearby Waikato River which snakes through the city.

The Ripples sculpture was commissioned in 1987 for the opening of the Waikato Museum. It is a suspended sculpture, consisting of a six-metre span of carbon fibre reinforced polyester resin, which represents the ripple effects of a falling stone hitting the water. It hangs between the canopy of trees, approximately 20 metres in the air, above the Waikato Museum riverbank. It was created by Christchurch artist Neil Dawson.

Located on the bank of the Waikato River, the Koru Family sculpture was given to Hamilton City by the Year 2000 Millennium Committee to commemorate the family in 2000. The sculpture was created by Carla Van de Veen of Te Aroha, made of Hinuera Stone.

The Farming Family was donated to the city by businessman Sir Robert Jones in 1990 to commemorate the ordinary farming family as being the unsung heroes of Hamilton's 150-year history. The statue, a bronze life-sized sculpture created by Margriet Windhausen van den Berg, has sparked much debate about whether it solely celebrates the European history of the Waikato region. The Farming Family consists of a male farmer and his wife, two young children, a dairy cow, a sheep and a dog. The statue is located on a traffic island at the intersection of Victoria Street and Ulster Street.

All content from Kiddle encyclopedia articles (including the article images and facts) can be freely used under Attribution-ShareAlike license, unless stated otherwise. Cite this article:
Hamilton Central Facts for Kids. Kiddle Encyclopedia.