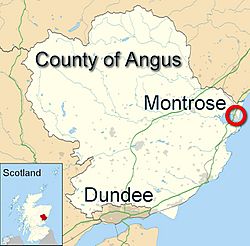 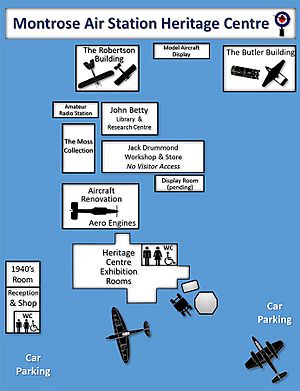 The Montrose Air Station Heritage Centre is located to the North of Montrose, Angus, Scotland. Montrose has the distinction of having the first operational military airfield in Great Britain and the Heritage Centre is located on the former airfield. It aims to show the human side of its history with a collection of contemporary photographs, artefacts and memorabilia. These not only tell of the history of the airfield but also the story of the men and women who served there and those who lived in the area.

The Air Station Heritage Centre is run by the Ian McIntosh Memorial Trust and is a registered Scottish charitable organisation. It is self-financing, relying on visitors fees and donations together with grants from local government and the Heritage Lottery Fund. The centre receives no regular financial support from local or national government.

The air station closed in 1920 but was reopened in 1935 for use in the Second World War. After the war the airfield continued to be used as a maintenance unit until it closed on 4 June 1952.

In 1992 the trust purchased the Watch Office and ground which became the Montrose Air Station Museum. Over the years the museum has added more buildings to house its increasing collection of artefacts, memorabilia and models aided by donations, local government grants and the Heritage Lottery Fund.

On 19 May 2012 a memorial stone was unveiled at the air station in remembrance of the units and personnel who were stationed there. The memorial was provided by the Airfields of Britain Conservation Trust. 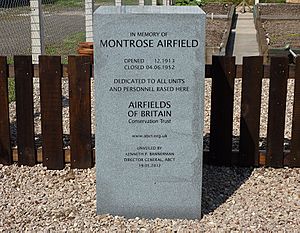 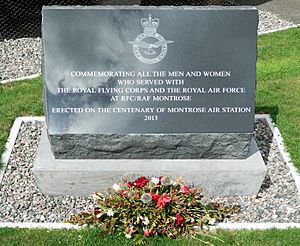 This project was supported by the Heritage Lottery Fund as well as local benefactors. It commenced in June 2010 and involved extending the Romney Building to create room for new facilities. These included a Link Trainer, computer flight simulator and a learning zone with audio and video resources. It was completed in October 2012.

Similar to the wartime Spitfire Funds this was to raise money to purchase a full size replica Spitfire. Additional funding from Angus Council has enabled the purchase of the Spitfire which now sits at the front of the main building. The Aircraft, made by GB Replicas, stands as a monument to the many people who served there during two World Wars. It is in the colours and markings of the 602 Squadron (City of Glasgow) Red Lichtie Spitfire. The original Red Lichtie was purchased in 1942 by the people of Arbroath, Angus after they started a Spitfire fund and raised £5000. On 26 July 2013 HRH Prince Edward, Earl of Wessex visited the Heritage Centre and unveiled the Spitfire and a commemorative stone.

The first pilot to land in France after the declaration of war was Lieutenant H.D. Harvey-Kelly of No.2 Squadron RFC Montrose. The project is named after this event. A new building has been erected which will house the centre’s artefacts from World War I including the Robertson Cross and the replica Sopwith Camel. They have also constructed a full size replica B.E.2a aircraft and put together a comprehensive exhibition. Also part of this project will involve the production of a Roll of Honour, an 'online' Book of Remembrance for pilots who were killed in accidents whilst flying at Montrose Air Station. The First in France 1914 project is supported by the Heritage Lottery Fund. 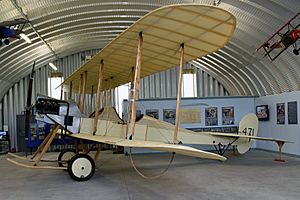 Replica of B.E.2a No.471 built by Heritage Centre volunteers from original plans. 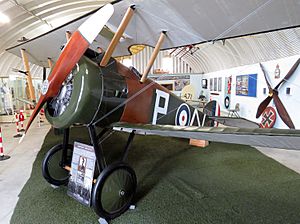 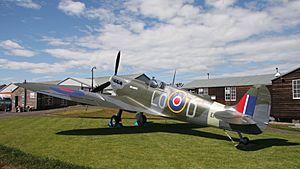 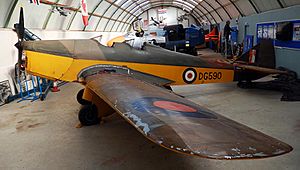 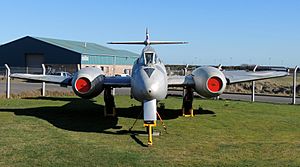 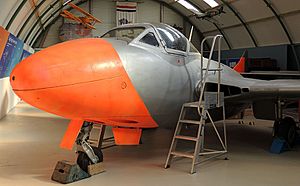 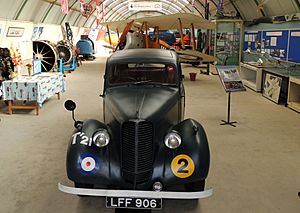 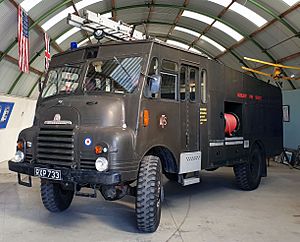 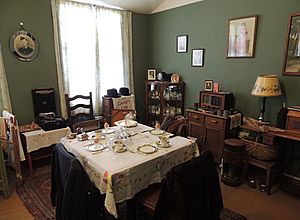 The MT (Mechanised Transport) Hut can be seen in some of the oldest pictures of the air station and dates back to around 1915. After the closure of the air station in 1952 the hut fell into a state of disrepair. In 2009 volunteers started restoring the hut and it was formally reopened on 5 May 2012. The building is a category:C(S) Listed Building Historic Scotland Building ID: 38231

Built in 1915 this was the former headquarters building of the air station and now holds several exhibitions. The building is a category:C(S) Listed Building Historic Scotland Building ID: 38229

Formerly the Commanding Officers office, there is a display on the theme of the Home Front during World War II

Is used for temporary displays.

The largest display room tells the story of Montrose Air Station from its foundation in 1913 to its closure in 1952 and the people who served there. A new acquisition for 2013 is a large Diorama showing the layout of the airfield in 1940.

The pillbox dates from 1949 and was an important part of the defences at Montrose. The Anderson shelter was designed in 1938 by William Paterson and Oscar Carl (Karl) Kerrison in response to a request from the Home Office. It was named after Sir John Anderson, then Lord Privy Seal with special responsibility for preparing air-raid precautions immediately prior to the outbreak of World War II, and it was he who then initiated the development of the shelter. It was widely used by the civilian population during World War II

This is named after LAC Jack Drummond who was posted to Montrose in 1937. The Nissen hut is used for restoration projects and houses working machinery. For safety reasons it is not open to the public.

Named after Squadron Leader John Betty, former Chief Flying Instructor at RAF Montrose, the library houses the largest private collection of aviation books in Scotland and the Heritage Centre’s archives. It is accessible to visitors by arrangement and will eventually provide computer access to archives in the future for family history research.

This building, a Romney Hut funded by the Heritage Lottery Fund, was named after David Butler who was a founder member of the Heritage Centre. It houses the Miles M.2H Hawk Major, T.22 de Havilland Sea Vampire and link trainer together with a display of aircraft engines. There is also a Pilot Training Display including a computer flight simulator and a Learning Zone for visits from local schools.

The Heritage Centre's newest building was erected in July 2014 and funded by the Heritage Lottery Fund. It was officially opened by the Lord Lieutenant of Angus, Mrs Georgiana Osborne, on 3 August 2014. The Heritage Centres World War I artefacts are on display in the building together with its full size replica B.E.2a and Sopwith Camel aircraft. The building is named after Lt Robertson who learned to fly at Montrose and was killed in action on his fourth mission 5 months later on 12 May 1917. He was buried by the Germans and the cross they made for his grave is now on display in the building. It stands as a memorial not just for Lt Robertson but to all the people who served at Montrose.

On 14 January 2019 Heritage Centre entered into a long-term agreement with Angus Council for use of Major Burke's Shed 1.b. Sheds 1.a and 1.b form the first of three hangars build in late 1913. It is planned to use the hangar to display several jet aircraft. The hangar currently has on display a Hawker Hunter F.1 WF619 on loan from the RAF Museum

To the immediate south of the Heritage Centre stand three aircraft hangars which are believed to be the oldest known example of their type in the world. The hangars were built at the end of 1913 and first used in early 1914 to house No. 2 Squadron when they moved to the airfield from Upper Dysart. Their design was based on Indian Army Sheds modified by Major Burke to house aircraft and were pre-fabricated in Glasgow before being transported to Montrose. The buildings were constructed of wood with corrugated iron roofs and each one had two gabled openings. The hangars were built in a curve following the path of railway line which used to be at the rear of the buildings.

The hangar farthest away from the heritage centre retains its original cladding. The building is a category:A Listed Building Historic Scotland Building ID: 38228

The other two hangars have had a steel cladding added in 1987-8 and on the 10 August 2018 were relisted from category:B to category:A in recognition of their historical importance Historic Scotland Building ID: 38227

All content from Kiddle encyclopedia articles (including the article images and facts) can be freely used under Attribution-ShareAlike license, unless stated otherwise. Cite this article:
Montrose Air Station Heritage Centre Facts for Kids. Kiddle Encyclopedia.