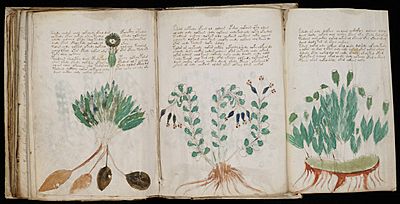 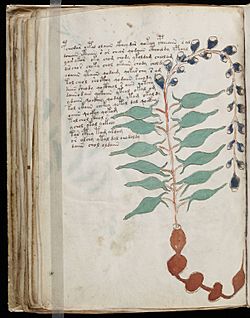 The Voynich manuscript is a manuscript named after Wilfrid Michael Voynich who bought it in the early 20th century. The manuscript is made up of about 240 vellum pages, and was probably written in the early 15th century in northern Italy. Today, it is in the library of Yale University.

Many pages contain illustrations. Although many authors have been thought to have written this manuscript, the author remains unknown. The text is written in an unknown language, in an unknown writing system. It looks like there are no errors in the text. There are no corrections to it. The text is probably some ciphertext; many people working in cryptography have tried to break its code, both amateur and professional cryptographers. Much less attention has been given to the illustrations, which seem to show plants, anatomic or astronomic links. It has been described as "the world's most mysterious manuscript".

In 2009, University of Arizona researchers performed radiocarbon dating on the manuscript's vellum, which they say (with 95% confidence) was made between 1404 and 1438. In addition, the McCrone Research Institute in Chicago found that much of the ink was added not long afterwards, confirming that the manuscript is an authentic medieval document.

As the text has not been translated yet, it has been sectioned based on the images. The sectioning is usually the following:

The very last page seems to have some sort of "key": three lines of text, with a script resembling that used in 15th-century Germany.

The purpose of the book was probably to serve as a manual to make drugs, or as a book about medicine. The first section is almost certainly a herbal. A herbal is a collection of plants, with their description. An identification of the plants, based on the images has mostly failed, though. Two plants can be guessed, with some certainty: the Wild pansy and the Maidenhair fern. Many of the plant pictures are composite: they combine parts of plants; the root of one plant is added to the leaves of another; the flowers may be from a third species. The leaves and fruit of the Castor oil plant have been identified, as well.

Because of the tubes in the biological section, the text may be related to alchemy. This would also make sense, if the text was about making certain kinds of medicine. The problem with that theory is that alchemy books of the time all use a common set of motifs for their pictures; these motifs cannot be found the manuscript.

Another idea is that the book is about astrology; practices common at the time, such as bloodletting were often connected with astrology. The problem with this approach is, that except for the signs of the zodiac, and one diagram possibly showing the classical planets, no one has shown that the symbols are found in other astrological traditions.

All content from Kiddle encyclopedia articles (including the article images and facts) can be freely used under Attribution-ShareAlike license, unless stated otherwise. Cite this article:
Voynich manuscript Facts for Kids. Kiddle Encyclopedia.